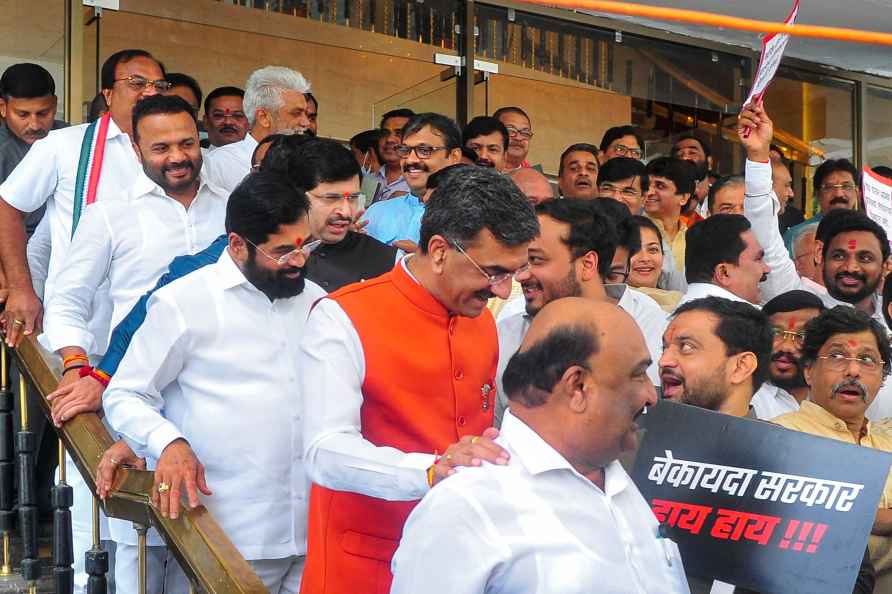 [Mumbai: Maharashtra Chief Minister Eknath Shinde looks at a placard displayed by an opposition member as he arrives for the first day of Monsoon Session of Maharashtra Assembly, in Mumbai, Wednesday, Aug. 17, 2022. ( /PTI] Mumbai, Aug 17 : Setting the Opposition tone for the Monsoon Session of Maharashtra Legislature, Shiv Sena leader and former minister Aditya Thackeray predicted that "the treacherous government of (Chief Minister) Eknath Shinde and (Deputy CM) Devendra Fadnavis will collapse soon," here on Wednesday. Interacting with the media, Thackeray Jr. said the Opposition is pitted against the "killers of democracy, and this illegal government of dishonesty will definitely come down". "Its an unconstitutional regime, illegal from the start, consisting of dishonest traitors...," said Thackeray sharply, ahead of the session. Referring to the inciteful statement by a Shinde Group MLA Prakash Surve of Mumbai and the slapping of a canteen manager by Hingoli MLA Santosh Bangar, he said that these are acts of 'cowards' and the people of the state will show them their place. Thackeray rued that such threatening language is happening in our Maharashtra which is "not acceptable to the people" and wondered "who is really the Chief Minister". "Goons have no place in the Maharashtra politics... If MLAs, who threaten people are walking around freely, then you can guess what will happen to the law and order situation in the state," he added. Dwelling on the recent cabinet expansion by CM Shinde, which has caused much heart-burns among the Shinde Group MLAs, Thackeray said it has "not included the independents or smaller parties supporting it, there is no representation to women and even a Mumbaikar is not taken on board". "In such a situation, nobody is concerned about the voice of the farmers or the women... They are more worried about what they got (cabinet portfolios) or what they didn't get," Thackeray pointed out. He claimed that even the first lot of Shiv Sena legislators who walked over to the Shinde Group in June were not taken in the cabinet, implying that loyalty does not count for them. The son of former CM Uddhav Thackeray reiterated that "this government will topple" and many of the MLAs, who left Shiv Sena, will return to the party-fold soon. /IANS

CBI, ED sent after our leaders because BJP wants to crush AAP: Arvind Kejriwal at his party's national conclave.

CBI, ED sent after our leaders because BJP wants to crush AAP: Arvind Kejriwal at his party's national conclave. […]