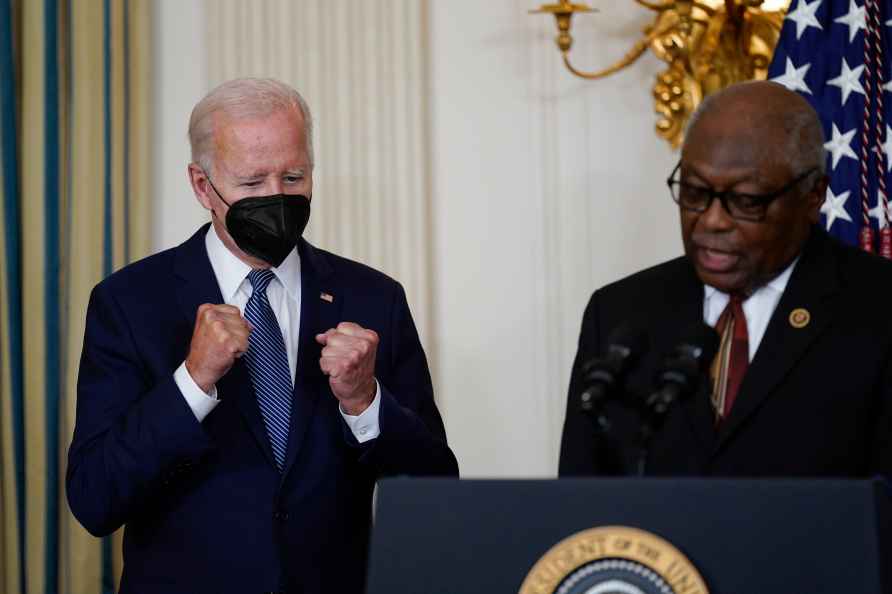 [President Joe Biden reacts as he listens to House Majority Whip Rep. James Clyburn, D-S.C., speak before Biden signs the Democrats' landmark climate change and health care bill in the State Dining Room of the White House in Washington, Tuesday, Aug. 16, 2022. /PTI] By Yashwant Raj Washington, Aug 17 : US President Joe Biden capped a recent string of administrative accomplishments by signing into law which is considered as his presidency's most ambitious legislation that commits unprecedented investment in fighting climate change, expands health insurance subsidies, lowers drug prices, and seeks to tackle inflation. The Inflation Reduction Act (IRA), as the legislation is called, is a skinnier version of the massive $2 trillion Build Back Better Act that Biden had announced immediately after taking office in 2021. Even then it's a major achievement. Biden's popularity remains low at 38 per cent, according to Gallup. It's the lowest for any US president at this stage of the second year of their term going back to 1954; even former President Donald Trump was more popular at this stage, with 40 per cent. But Democrats are hoping for these recent legislative victories to give them the momentum they need for the upcoming midterm elections in November, when they are widely projected to lose control of the House of Representatives and, possibly, the Senate. "Let me say from the start: With this law, the American people won and the special interests lost," Biden said before signing the legislation at a White House ceremony in an obvious swipe at critics of the bill, specially Republicans, none of whom voted for it, neither in the Senate nor the House of Representatives. "That's the choice we face. We can protect the already powerful or show the courage to build a future where everybody has an even shot," he added. With Republicans opposed to the legislation - from the Build Back Better-days to this - Biden had had faced the stiffest challenge from moderates in his own party, essentially two senators, Joe Manchin and Kyrsten Sinema. Manchin attended the signing ceremony and Biden handed him the pen he used to sign the legislation into law. The bill earmarks $370 million investment in tackling climate change over the next 10 years; provisions allowing the health department to negotiate the prices of certain drugs; expand the Affordable Care Act (better known as Obamacare) for another three years; a 15 per cent minimum tax on corporations making $1 billion or more; and a 1 per cent excise tax on stock buybacks. The law also sets aside more than $310 billion to shore up the resources of the federal income tax department - the Internal Revenue Service - to enable it to go after tax-evaders. The IRA follows the passage recently of a gun law reforms Act, the CHIPS Act, which will incentivize manufacturing of semiconductors in the US and a law that expands health cover for veterans to include those exposed to burn pits and toxic gases. Both passed congress with bipartisan support, a rare commodity in the bitterly divided politics of current times. Biden called these legislations the "season of substance". He said, "For a while, people doubted whether any of that was going to happen. But we are in a season of substance." He added: "This administration began amid a dark time in America... a once-in-a-century pandemic -- devastating joblessness, clear and present threats to democracy and the rule of law, doubts about America's future itself And yet, we've not wavered. We've not flinched. And we've not given in. Instead, we're delivering results for the American people. We didn't tear down; we built up. We didn't look back; we looked forward." /IANS

New Delhi, Sep 17 : India on Saturday reported 5,747 fresh Covid cases and 29 deaths in the last 24 hrs, Union Ministry of Health and Family Welfare said on Saturday. With the fresh fatalities, […]