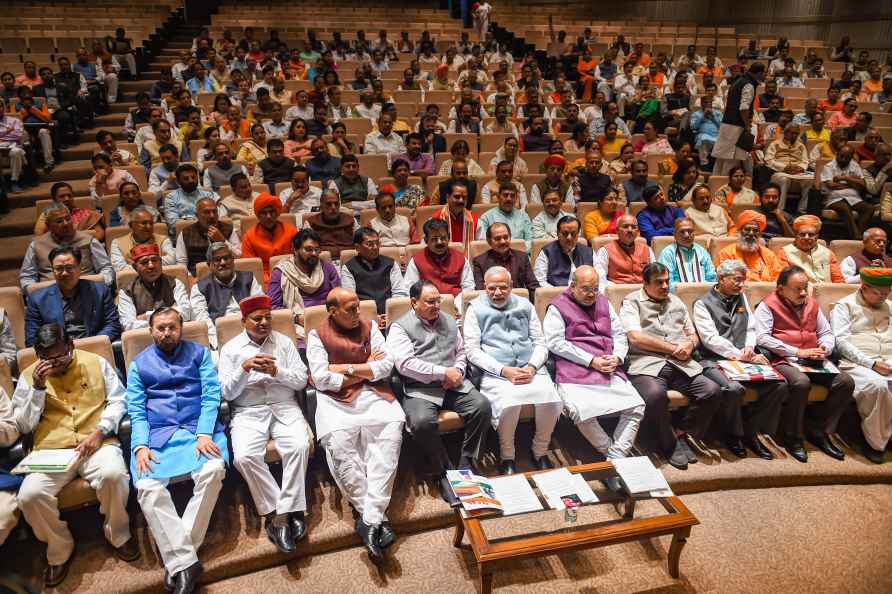 By Santosh Kumar Pathak New Delhi, Aug 14 : Generally, political parties establish contact with people of the country either during elections or its organsiational programmes, but the BJP, which claims to be world's biggest party, is continuously strengthening itself through different methods, campaigns and directly reaching out to masses. Through 'Har Ghar Tiranga' campaign, started on appeal of Prime Minister Narendra Modi, the BJP is trying to reach out to each household. As per BJP general secretary Arun Singh, the Central government's 'Har Ghar Tiranga' campaign is drawing unexpected support across the country. He claimed that Tricolour will be hoisted in every city, village, ward, house of the country. Arun Singh said that a target has been set to hoist 20 crore Triclours in the country. The BJP claims that this target will be achieved on August 15. On Saturday all senior leaders of the party -- national president J.P. Nadda, Union Home Minister Amit Shah, Defence Minister Rajnath Singh, Road Transport and Highways Minister Nitin Gadakari, among other party leaders were seen hoisting the Tricolour at their homes. Talking about the campaign, Nadda said BJP is hoisting Tricolour at 8.5 lakh booths. Crores of party workers are supporting the campaign, Nadda added. Entire country from "Attock to Cuttack" and from "Kashmir to Kanyakumari" will see flags hoisted at all houses and the countrymen are going to witness the historic moment soon, it is being claimed. Under the 'Har Ghar Tiranga' campaign, the BJP leaders are seen striking conversation with the countrymen from August 13. The exercise will continue till August 15. The BJP is claiming that this campaign has united the country by one thread and for this the Prime Minister deserved a hearty congratulations. According to Arun Singh, "There was a time when hoisting Tricolour was difficult at Lal Chowk in Kashmir. But, today, Ghanta Ghar in Lal Chowk is illuminated with colours of Tricolour." "Tiranga rally was held on the banks of Dal Lake. Have we imagined this before," Arun Singh asked. Appealing to countrymen for hoisting Tricolour at their house, the Prime Minister had said, "This year we are celebrating Azadi Ka Amrit Mahotsav. Let us strengthen Har Ghar Tiranga campaign. From August 13 -15, either hoist Triclour or display it at your homes. Azadi Ka Amrit Mahotsava, commemorating the 75th anniversary of country's Independence, is not only being celebrated in the country but also abroad, in the ministries, states, union territories, corporate houses, Non government organisations, among others. More than 60,000 programmes have been organised in the country under the Mahotsava. Establishing contact with 20 crore households strengthens the BJP socially and creatively and because of this, the party is seen far ahead of its opponents in the elections. (Santosh Kumar Pathak can be contacted at santosh.p@ians.in) /IANS

Despite oath of not leaving party, Goa Congress MLAs switch to BJP
New Delhi, Sep 14 : Ahead of the assembly elections in Goa the Congress had administered an oath that the elected MLAS will not leave the party but on