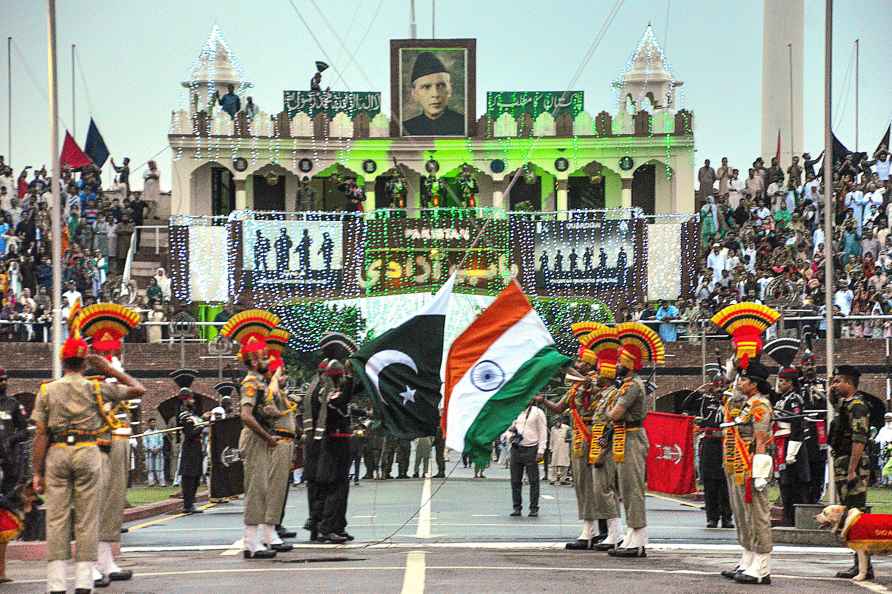 [Attari: Border Security Force (BSF) and Pakistani Rangers personnel take part in the Flag Lowering Ceremony, on the 76th Independence Day, at the India-Pakistan Attari-Wagah border, near Amritsar, Monday, Aug. 15, 2022. ( /PTI] Amritsar, Aug 15 : Tens of thousands spectators, comprising foreigners, gathered on Monday to witness after a gap of two years owing to the pandemic the first-of-its-kind iconic ceremony with electrifying effect on the boisterous audience on the borders of two countries near this holy town of Punjab. This time the beating retreat ceremony comprising flag lowering and ceremonial drill held at the Attari-Wagah border with a full-key affair was special as India celebrated 75th Independence Day. Before the retreat ceremony, which has seen a military exercise and lowering of the national flags of both India and Pakistan just before dusk since 1959, border forces of both India and Pakistan -- the Border Security Force (BSF) and the Pakistan Rangers -- exchanged sweets and greetings to mark the traditional bonhomie between both the forces. A day earlier, security forces of both the nations exchanged sweets at the Attari-Wagah crossing to mark Pakistan's Independence Day. On the occasion of India's 75th Independence Day, the BSF had made elaborate arrangements for the visitors to witness patriotic events to mark the ceremony close to the zero line of India and Pakistan border that witnessed horrors of partition. Before the 30-minute ceremony begins, women and children danced their hearts out to some foot-tapping patriotic songs of Punjabi singer Jaswinder Jassi. There was a thin audience at the Attari border towards Pakistan to witness the ceremony, along the Radcliffe Line border between India and Pakistan, in which border gates are closed for the night after the BSF and Pakistan Rangers go through their disciplined paces. The joint check post (JCP), which comprises a gallery with a capacity to accommodate nearly 25,000 spectators to witness the flag lowering ceremony, was closed for the spectators in the first week of March 2020. The BSF resumed the ceremony for public viewing with a limited audience of 300 after over a year and half in September last year. The entry to the JCP gallery is on a first come, first served basis. "We have specially come from Delhi to witness the retreat ceremony to mark Azadi Ka Amrit Mahotsav," Neha Dubey, a student from Delhi, who came here along with her 15 classmates. Her friend Monika Handa, added: "We reached here four hours in advance, so we managed to enter the gallery. There is a huge crowd outside the venue, their turn. In my life I have never seen such a charged spirit of patriotism among the audience." The Attari-Wagah Joint Check Post is some 30 km from Amritsar, while it is 22 km from Lahore in Pakistan. The border guards on both sides normally exchange sweets on special occasions like Diwali and Eid as well as Independence Day and Republic Day functions. India had chosen to skip the tradition in 2019 over growing incidents of ceasefire violations across the LoC in Jammu and Kashmir. After the surgical strikes by Indian forces across the borders in September 2016, the BSF did not offer sweets to the Pakistan Rangers. /IANS

Yangon, Sep 14 : Myanmar confirmed 299 new cases of Covid-19 in the past 24 hours, bringing the tally to 617,355, according to the Ministry of Health. It added on Tuesday that health authorities […]

Copenhagen, Sep 14 : At least 17 million people in the World Health Organisation (WHO) European Region experienced the post-Covid-19 condition, or long Covid, in the first two years of the pandemic, s […]

Damascus, Sep 14 : A total of 26 cholera cases have been confirmed in Syria, and a UN official expressed "serious concern about the outbreak of the disease". The Syrian Health Ministry said in a […]

New Delhi, Sep 14 : Pakistan has formally written a letter to the Afghan authorities regarding the presence of Maulana Masood Azhar, the founding head of the banned terrorist organization Jaish-e-Moha […]