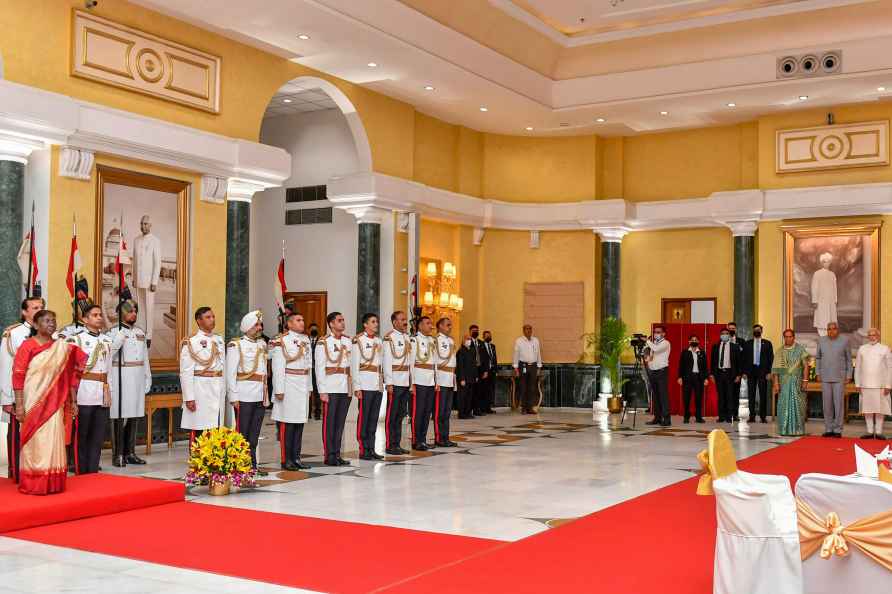 [**EDS: TWIITER IMAGE POSTED BY @rashtrapatibhvn ON MONDAY, AUG. 15, 2022** New Delhi: President Droupadi Murmu during 'At Home' reception hosted by her on the occasion of the 76th Independence Day, at Rashtrapati Bhavan in New Delhi. Vice President Jagdeep Dhankhar and Prime Minister Narendra Modi are also seen. ( /PTI] New Delhi, Aug 15 : Addressing the nation for the 9th time from the historic ramparts of Red Fort on the occasion of 75th Independence Day, Prime Minister Narendra Modi called for moving India forward with five pledges to achieve the dreams by 2047. PM Modi said that India must be a developed nation in 25 years. As we enter the Amrit Kaal, we must resolve to fulfil the dreams of India's freedom fighters. "We must resolve to work towards a 'Viksit Bharat' (Developed India) and remove any vestiges of colonialism from any corner or in our hearts," said the Prime Minister. "In the coming years, we have to focus on 'Panchpran' (5 pledges). First: to move forward with bigger resolutions and resolve of developed India; second: to erase all traces of servitude; third: be proud of our legacy; fourth: the strength of unity; and fifth: the duties of citizens that also includes the PM and CMs," said PM Modi. "Working towards a Viksit Bharat, remember the time before Independence... yes, people had different methods of working but the goal was the same and the goal was big - the freedom of India. In this Amrit Kaal we have to come together and work towards another big goal of a Viksit Bharat," he said. PM Modi urged the youth of the nation from the rampart of Red Forte to dedicate the next 25 years of their lives for the nation's development. He said that we should work towards the development of the entire humanity. "When the dreams are big, hard work is important. It needs to be inspired by the pledge and the determination of freedom fighters who dreamt of a free India," PM added in his historic speech. PM Modi said that we have to put India first and this will pave the way for a united India. /IANS

10 killed due to flash floods in Italy
[People remove mud from a street in Senigallia, central Italy, Friday Sept. 16, 2022. Flash floods triggered by heavy rain have swept through towns in

Kangana Ranaut wishes PM Modi: Nothing can erase your legacy

Mumbai, Sep 17 : Actress Kangana Ranaut wished Prime Minister Narendra Modi on his birthday on Saturday. She shared a picture and penned a note for him praising him as a leader and said that nothing c […]

Mumbai, Sep 17 : The Board of Control for Cricket in India (BCCI) on Saturday congratulated spinner Ravichandran Ashwin on his 36th birthday, listing the star bowler's achievements over the years and […]