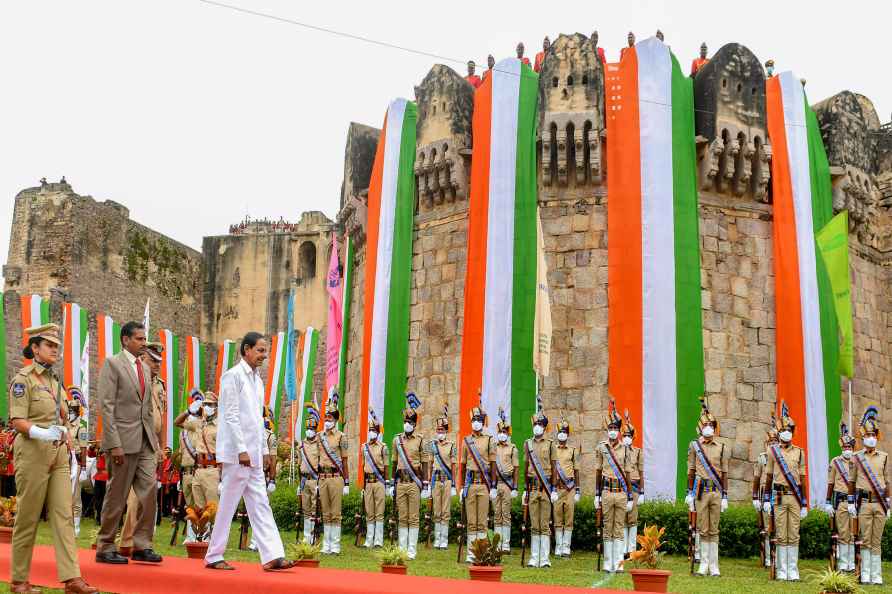 [Hyderabad: Telangana Chief Minister K. Chandrashekar Rao during 76th Independence Day celebrations at Golconda Fort, in Hyderabad, Monday, August 15, 2022. ( /PTI] Hyderabad, Aug 15 : Telangana Chief Minister K. Chandrasekhar Rao on Monday targeted the Narendra Modi government at the Centre saying it is pursuing politics of hate to divide people to hide its failures. During his speech at Independence Day celebrations at the historic Golconda Fort, the chief minister alleged that those ruling at the Centre were resorting to despicable tactics to divide people. KCR, as the chief minister is popularly known, lamented that those holding Constitutional posts were resorting to fascist attacks to destroy the peaceful co-existence which India preserved for generations. He said this wickedness was causing pain to the freedom fighters. He alleged that the incompetence of the Central government has impeded the country's growth. Inflation has gone up and prices of essential commodities are sky-rocketing. The value of the Indian rupee has dropped to its lowest and the unemployment in the country is at its peak. He said to hide these failures, the rulers at the Centre were doing politics of hate to divide people. The chief minister said while India is praised world over for its unity in diversity, today's absurd tendencies were tarnishing India's image. KCR also alleged that some divisive forces in the state were also trying to incite communal passions to destroy peace and harmony thereby creating hurdles in the path of development. He said intellectuals, youth, students and everyone need to be alert to foil the conspiracies of these forces. The chief minister said after battling many crises, Telangana saw rapid growth and progress during the last eight years. The state is peacefully marching ahead on the path of development. "As the chief minister it is my responsibility and Telangana government's responsibility to ensure that without ignoring any section, we carry all sections ahead. It is the duty of every citizen of Telangana to protect Ganga Jamuni tehzeeb (confluence of Hindu Muslim culture) praised by Mahatma Gandhi," he said. KCR alleged that the Centre is mocking the Constitution which says India is a Union of States. He accused the Union government of taking decisions on the subjects in the concurrent list without consulting states. He said the Centre unilaterally introduced agriculture laws which angered the farmers and the Prime Minister himself had to apologise. KCR said the Centre has burdened poor and middle classes by imposing GST on their basic necessities. He remarked that from milk for children to construction of graveyards, the Centre is indiscriminately imposing taxes. He also slammed the Modi government for cutting down the share of states in the Central taxes by mobilizing revenues through the backdoor of cesses. He said this would bring down the share of the states during 2022-23 from 41 per cent to 29.6 per cent. Not stopping at this, the Centre is acting in an autocratic manner to impose several restrictions, harming financial autonomy of states. The Centre is imposing cuts on the debts raised by the states within FRBM limits, he said. /IANS

Patiala: Singer Daler Mehndi with National President of Anti Terrorist Front India Viresh Shandilya after being released from prison on bail in a human trafficking case, in Patiala, Friday, Sept. 16, […]

A cheetah lies inside a transport cage at the Cheetah Conservation Fund (CCF) in Otjiwarongo, Namibia, Friday, Sept. 16, 2022. The CCF will travel to India this week to deliver eight wild cheetahs to […]

[Experts work during the exhumation of bodies in the recently retaken area of Izium, Ukraine, Friday, Sept. 16, 2022. Ukrainian authorities discovered a mass burial site near the recaptured city of Iz […]