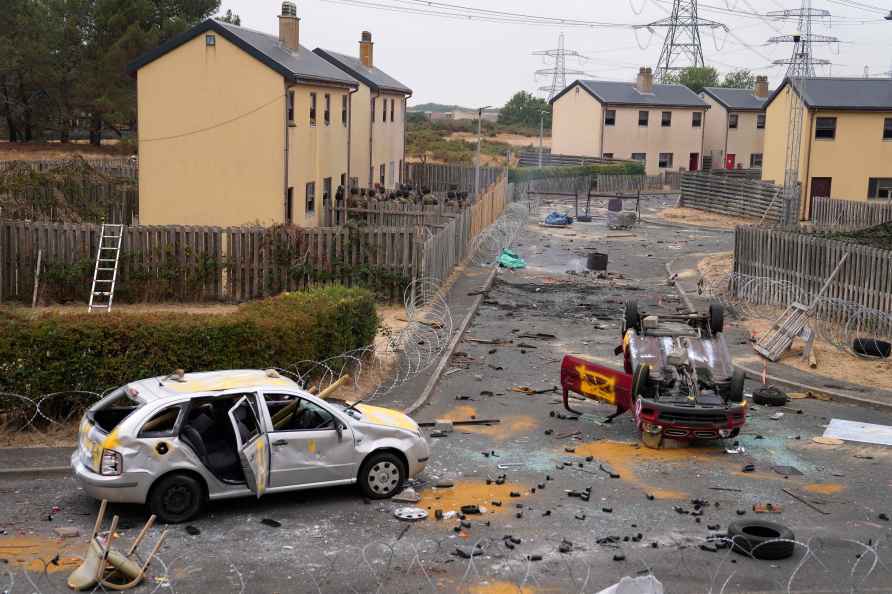 [Ukrainian volunteer military recruits take part in an urban battle exercise whilst being trained by British Armed Forces at a military base in Southern England, Monday, Aug. 15, 2022. MOD and British Army as the UK Armed Forces continue to deliver international training of Ukrainian Armed Forces recruits in the United Kingdom. /PTI] Kiev, Aug 15 : Artillery shells again struck the Ukrainian city of Enerhodar near the Russian-occupied Zaporizhzhya nuclear power plant, as dozens of countries demanded the immediate withdrawal of Russian troops from the area. "The stationing of Russian military personnel and weapons at the nuclear facility is unacceptable," a statement on behalf of 42 countries said. "We urge the Russian Federation to immediately withdraw its military forces and all other unauthorized personnel from the Zaporizhzhya Nuclear Power Plant, its immediate surroundings, and all of Ukraine so that the operator and the Ukrainian authorities can resume their sovereign responsibilities within Ukraine's internationally recognised borders." The demand was made on behalf of the EU as well as the US, Britain, Norway, Australia, Japan, New Zealand and many other countries, dpa news agency reported. "This will also enable the IAEA (International Atomic Energy Agency) to carry out its verification pursuant to Ukraine's safeguards obligations under safe and secure conditions and in a timely manner," the statement added. Europe's largest nuclear power plant, which has been occupied by Russian troops since March, has been subject to shelling for several weeks. Each side blamed the other for the shelling on Sunday, and both sides reported that one civilian had been killed. Russian authorities said "the nationalists of Ukraine" had hit the area, while the Ukrainian mayor of the city, Dmytro Orlov, spoke of a "murderous provocation" by the Russian side. There was no independent confirmation of the incident. Experts from the IAEA are due to inspect the site. However, the United Nations, Russia and Ukraine cannot agree on the planning for the visit. Russian diplomat Mikhail Ulyanov has called on the UN to intervene to ensure the safety of the plant. It is the task of the UN Secretariat to "give the green light for a visit to the nuclear power plant by experts from the International Atomic Energy Agency," Ulyanov told the Russian state news agency TASS in an interview published on Sunday. According to reports, the UN has so far not allowed IAEA chief Rafael Grossi to travel, not only for security reasons, but also because of a dispute over the itinerary. Grossi could travel under Russian protection via the Black Sea peninsula of Crimea, which was annexed by Moscow in 2014, but this would be perceived as an affront by Kiev. Ukraine accuses Russian troops of using the nuclear power plant as a fortress from which to fire on the small towns of Nikopol and Marhanez, which lie on the other bank of the Dnipro reservoir. Russia, on the other hand, claims that Ukraine is shelling the plant with drones, heavy artillery and rocket launchers. The Kremlin said meanwhile it had hit targets in dozens of places in eastern Ukraine with missiles and artillery. The attacks were concentrated in the Donetsk region, the Russian Defence Ministry said. In the neighbouring Kharkiv region the village of Udy was captured, Moscow said, and a fuel depot near Sloviansk was destroyed. The Ukrainian general staff in Kiev reported intense attacks in the east and south of the country. In the Donetsk region, an attempt by Russian forces to break through to Sloviansk had been repelled, it said. Overall, Kiev said the situation was largely unchanged. /IANS

High Court stays imprisonment of Daler Mehndi in human trafficking case
[**EDS: FILE IMAGE** Patiala: In this Thursday, July 14, 2022 file photo singer Daler Mehndi is taken to jail after he was sentenced for his alleged i

Panaji, Sep 14 : In yet another setback to Congress in Goa, a group of eight MLAs led by Michael Lobo, who was removed from post of leader of opposition, joined the ruling BJP on Wednesday. With […]