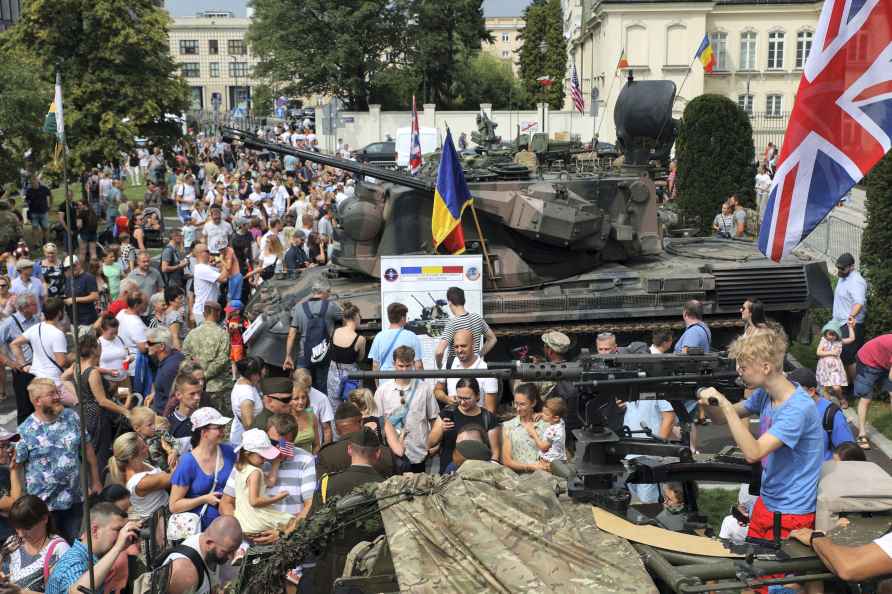 [People attend a military picnic marking the Polish Army Day in Warsaw, Poland, Monday, Aug. 15, 2022. The Polish president and other officials marked their nation's Armed Forces Day holiday Monday alongside the U.S. army commander in Europe and regular American troops, a symbolic underlining of NATO support for members on the eastern front as Russia wages war nearby in Ukraine. /PTI] By Sumi Khan Dhaka, Aug 15 : Bangladesh Prime Minister Sheikh Hasina on Monday paid tributes to her father, Bangabandhu Sheikh Mujibur Rahman, marking his 47th death anniversary and the National Mourning Day. As part of the state program, Hasina placed a wreath at Rahman's portrait in front of the Bangabandhu Memorial Museum at Dhanmondi Road No 32 in the capital. As part of a coup, a group of disgruntled members of the Bangladesh Army on August 15, 1975, assassinated Sheikh Mujibur, and most of his family after they invaded his Dhanmondi 32 residence. Besides Sheikh Mujibur, his wife Bangamata Begum Fazilatun Nesa Mujib, their three sons -- Sheikh Kamal, Sheikh Jamal, and Sheikh Russel -- as well as three close relatives were also killed in the attack. Bangabandhu's two daughters -- Sheikh Hasina and Sheikh Rehana -- escaped the carnage as they were abroad at the time of the incident. Also on Monday, a smartly turned out contingent of Bangladesh Armed Forces gave a state salute at that time, while the bugle played a tune of grief. After paying tributes to Bangabandhu, the premier also went to the Banani Graveyard where her mother, brother and other victims of the massacre were laid to rest On Sunday, the Prime Minister had addressed a meeting with the organising secretaries of the ruling party at her official residence Ganabhaban here during which she said that opposition parties could stage movements in the democratic process. "We realise people's sufferings from the price hike of fuels and electricity rationing. Many people, including the opposition, are trying to take advantage, but if they do excess in the name of movement, people's sufferings will only increase," she said. Hasina noted that she has directed concerned authorities to allow the opposition to stage their movement and not to arrest and disturb anyone for this. "The opposition will try to misuse the situation, but if they do any destruction, it is the people who will ultimately suffer. The protesters should realise that," she said, adding: "If they want to besiege the Prime Minister's office, let them do it." /IANS