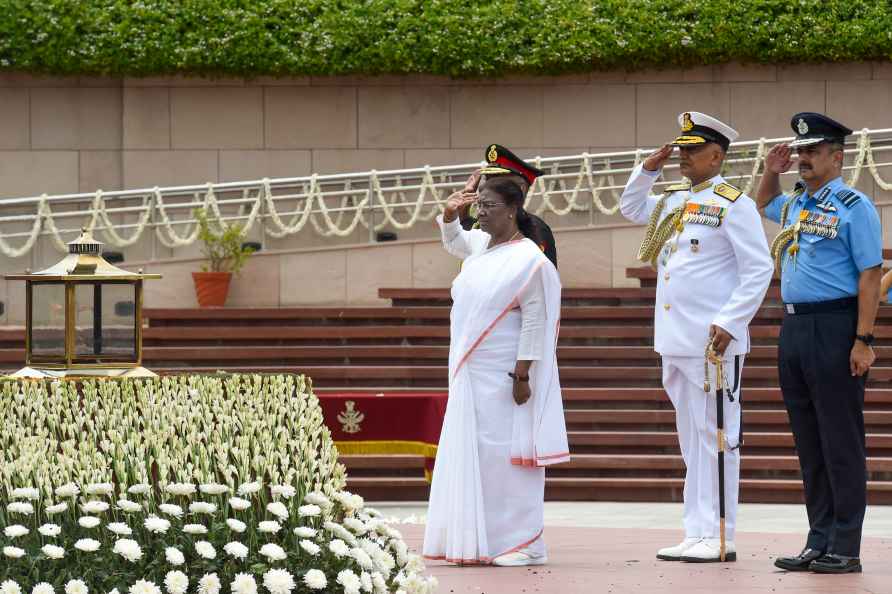 [New Delhi: President Droupadi Murmu with Chief of Army Staff General Manoj Pande, Chief of Air Staff Air Chief Marshal VR Chaudhari and Chief of Naval Staff Admiral R. Hari Kumar pays homage at the National War Memorial on the occasion of 76th Independence Day, in New Delhi, Monday, Aug. 15, 2022. ( /PTI] Kathmandu, Aug 15 : The Nepal government has decided to extend a formal invitation to Chief of Army Staff (COAS) of the Indian Army, General Manoj Pande to visit the Himalayan nation next month. Minister of Communication and Information Technology, Gyanendra Bahadur Karki said the armies of the two neighbouring countries will decide the convenient date for the visit. The COAS will be conferred with the honorary title of Nepali Army by President Bidhya Devi Bhandari as per the long standing tradition between Nepalese and Indian armies. Giving the highest rank to the chiefs of each other's military is a custom that Nepal and India have followed since 1950 when Indian Army Chief General KM Cariappa visited Nepal. Nepal's Chief of Army Staff General Prabhuram Sharma, through the Ministry of Foreign Affairs, had already offered his Indian counterpart to visit Kathmandu from September 5 to 8. However, the date is yet to be approved. In November last year, COAS Sharma had received the honorary title of General of the Indian Army from the then Indian President Ram Nath Kovind. /IANS

New Delhi, Sep 14 : In a landmark decision, the Supreme Court on Wednesday allowed the Board of Control for Cricket in India's (BCCI) plea in connection with the amendments proposed to its constitutio […]

[**EDS: COMBO PHOTO** New Delhi: Combo photo of arms, ammunition and cash recovered from AAP MLA Amanatullah Khan's associates during a raid by Anti-Corruption Branch in connection with a two-year-old […]

Bhubaneswar, Sep 14 : The Odisha government on Wednesday carried out a bureaucratic reshuffle, appointing 2001 batch IAS officer Shalini Pandit as Secretary, Health and Family Welfare. As per a […]