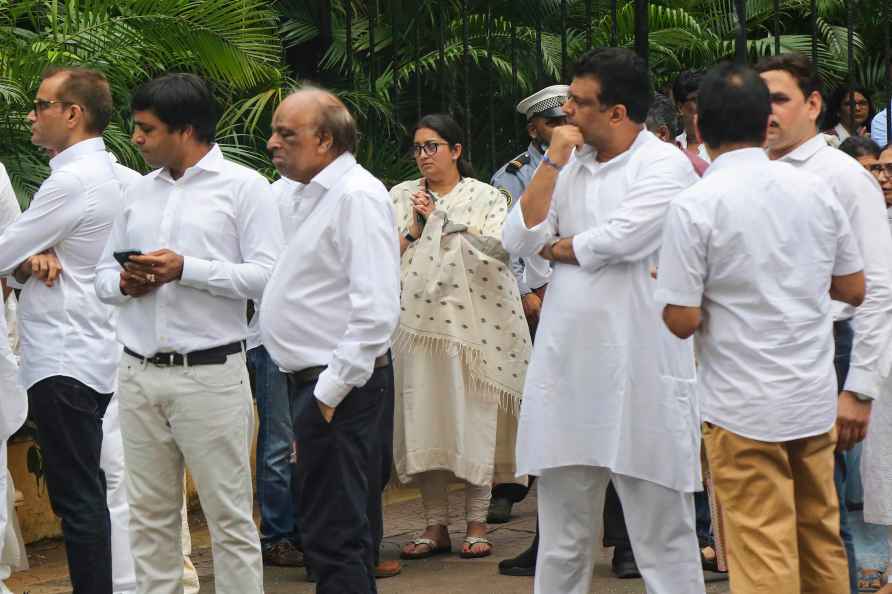 [Mumbai: Union Minister Smriti Irani (C) after paying homage to veteran stock market investor and Indian billionaire late Rakesh Jhunjhunwala at his residence, in Mumbai, Sunday, Aug. 14, 2022. The 62-year-old Rakesh Jhunjhunwala passed away on Sunday morning in Mumbai. ( /PTI] Mumbai, Aug 14 : Top broker-investor and founder of the recently-launched Akasa Air Rakesh Jhunjhunwala, passed away in Breach Candy hospital here on Sunday morning. A Chartered Accountant by qualification and training, he was 62 and is survived by his wife Rekha and two children. Often referred to as the 'King of Bulls' in the stock markets, Jhunjhunwala's latest venture Akasa Air's maiden flight took off exactly a week ago on August 7, last Sunday. Jhunjhunwala had an estimated net worth of $5.5 billion (as of July 2022), which made him the 36th richest man in India. Jhunjhunwala was also chairman of Hungama Media and Aptech, as well as a director of Viceroy Hotels, Concord Biotech, Provogue India, and Geojit Financial Services. He grew up in Mumbai, where his father was posted as an Income Tax Officer. After graduating from Sydenham College in 1985, he enrolled at the Institute of Chartered Accountants of India. Jhunjhunwala invested Rs 5,000 in capital in 1985 which grew to Rs 11,000 crore by September 2018. He has developed interest in the equity market after listening to his father discussing it with his friends. His father had asked him to read newspapers regularly because news made the market volatile. Jhunjhunwala borrowed money from his brother's client and promised to return the capital with higher returns after his father refused to give money to him. When he bought 5,000 shares of Tata Tea. He made a huge profit in 1986. He earned over three-times profit. In three years he earned Rs 20-25 lakh. He remained an active investor in the market after that and held various stocks in his portfolio. Akasa Air is an Indian airline co-founded by Rakesh Jhunjhunwala and former Jet Airways CEO Vinay Dubey. The airline currently has two aircraft with additional order for 70 more aircraft and flies to three cities as of Aug 9, 2022. After the 2008 global recession, his stock prices fell by 30 per cent, but he eventually recovered from the loss by 2012. By the year 2020, Jhunjhunwala planned to give away 25 per cent of his wealth to charity. He contributed to St Jude, which runs shelters for cancer-affected children, Agastya International Foundation and Arpan, an entity that helps create awareness among children on sexual exploitation. Prime Minister Narendra Modi met Jhunjhunwala and his wife last year. "Rakesh Jhunjhunwala was indomitable. Full of life, witty and insightful, he leaves behind an indelible contribution to the financial world. He was also very passionate about India's progress. His passing away is saddening. My condolences to his family and admirers. Om Shanti,"Modi said on Twitter. /IANS

Lucknow, Sep 14 : In a heart-warming gesture, Rakesh Pratap Singh, Samajwadi Party MLA from Gauriganj in Amethi, has given Rs 21 lakh for the treatment of seven-month-old baby who is suffering from Ty […]