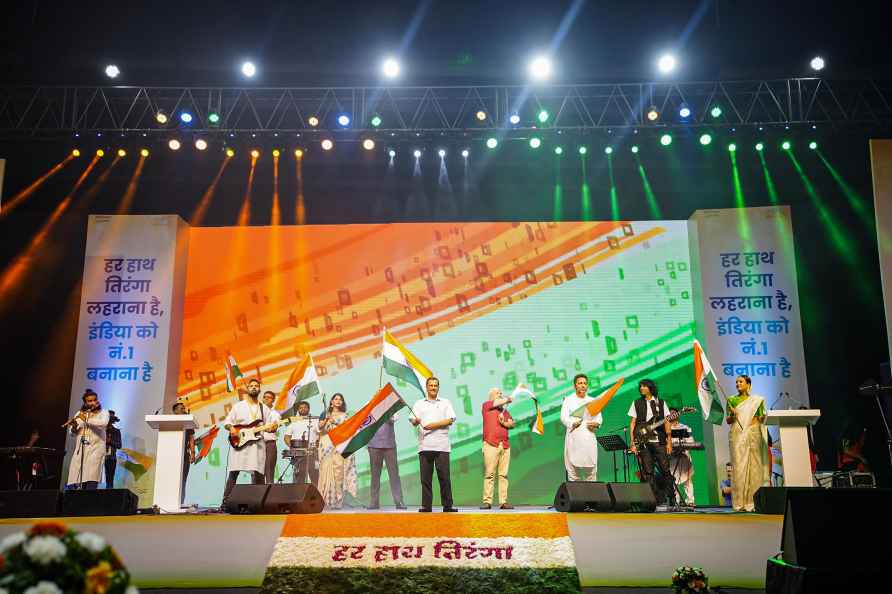 [**EDS: TWITTER IMAGE POSTED BY @ArvindKejriwal ON SUNDAY, AUG. 14, 2022** New Delhi: Chief Minister of Delhi Arvind Kejriwal with Deputy Chief Minister Manish Sisodia, playback singer Sukhwinder Singh and others waves the national flag during the 'Har Hath Tiranga' programme of the Delhi government, on the eve of Independence Day, in New Delhi. ( /PTI] By Avinash Prabhakar New Delhi, Aug 14 : After the spectacular victory in the Punjab assembly polls, the first beyond its home state of Delhi, the Aam Aadmi Party's national presence is gaining momentum at a dizzying pace with new office-bearers in many states. The Aam Aadmi Party is just one step away from being declared a national party. After being recognized as a state party in Delhi and Punjab, the Election Commission of India has recently recognized it as a state party in Goa. If the party gets recognition in just one more state, it will officially be a national party. In this regard, the party's national convener and Delhi Chief Minister Arvind Kejriwal on Tuesday said in a tweet, "After Del n Punjab, AAP is now a state recognised party in Goa too. If we get recognised in one more state, we will officially be declared as a "national party". I congratulate each and every volunteer for their hard work. I thank the people for posing faith in AAP n its ideology". The AAP is eying two important assembly polls this year --Gujarat and Himachal Pradesh -- with several senior leaders with proven track records and the 'Delhi Model of Governance'. The assembly polls in Gujarat and Himachal Pradesh are scheduled to be held in December and November this year respectively. The Delhi Model of Governance which the AAP leaders call the 'Kejriwal Model of Governance' is being widely discussed in both the states' polls after the victory in Punjab. The way the Gujarat model was discussed in the public domain, the same way AAP has coined the term the Delhi model. Basically, what the AAP claims for the model and wants to encash in the assembly polls rests on the three-four important aspects of free electricity and free water with a cap, free travel for women and the government's school education system. However, the party is also being criticized for these schemes with the Opposition calling them 'Free Ka Revdi'. But the AAP says they are welfare schemes for the citizens. While talking to IANS, AAP Rajya sabha MP Sanjay Singh said that the Kejriwal Model of governance is to provide relief to the common man while the Centre has developed the model that waives taxes of rich people. On being asked whether the party will fight the assembly polls on the back of this model, Singh said that the whole country needs this model of governance. He added that we have won the Punjab election on this model only where the electricity bills have started to come to zero. "Of course, we will go to the public with this model of governance in the assembly polls and also with some local issues. For that we will formulate a policy", Singh told IANS about the Gujarat election. Delhi Deputy Chief Minister Manish Sisodia recently said that two models of governance are being followed in the country. One is the 'Dostwadi' model of governance, where people in power waive taxes in crores of their super rich friends and call it development; the other model is honest use of taxpayers' money to open schools, provide free education to children, free electricity to the citizens, free bus travel for women and pension to the elderly people. Freebies narrative in Gujarat Polls While the political landscape of the national capital Delhi is experiencing heated arguments on the 'Freebies' culture between the ruling party and the AAP, the Supreme Court has said that freebies are a serious issue because the economy is losing money due to them. However, the real 'drama' is unfolding in Gujarat on freebies, where Kejriwal has promised freebies among other announcements. Kejriwal has announced a monthly allowance of Rs 1,000 for all women above 18, free electricity up to 300 units for each household per month, monthly unemployment allowance to jobless among others. However, the state BJP has countered it saying that people should not be misguided and this could lead to an irreparable economic mess. In Himachal Pradesh, the party entered the state's political landscape with Arvind Kejriwal's roadshow along with Punjab CM Bhagwant Mann at Mandi in April this year. However, the party has not been able to maintain the momentum on the organisational front in the state. The AAP suffered the first setback a day after the CM's roadshow at Mandi when its then state president Anoop Kesri announced he was joining the BJP. At the national level, Delhi health minister Satyendar Jain was given charge of the Himachal election. However, he is in custody in a money laundering case. Jain was arrested by the Enforcement Directorate in the money laundering case on May 30. The AAP emerging as a national party and an Opposition at the Centre depends on the assembly polls in these two states. /IANS

Hyderabad: Chairminar illuminated with tricolour lights on the eve of the National Integration Day, in Hyderabad, Friday, Sept. 16, 2022. ( /PTI […]