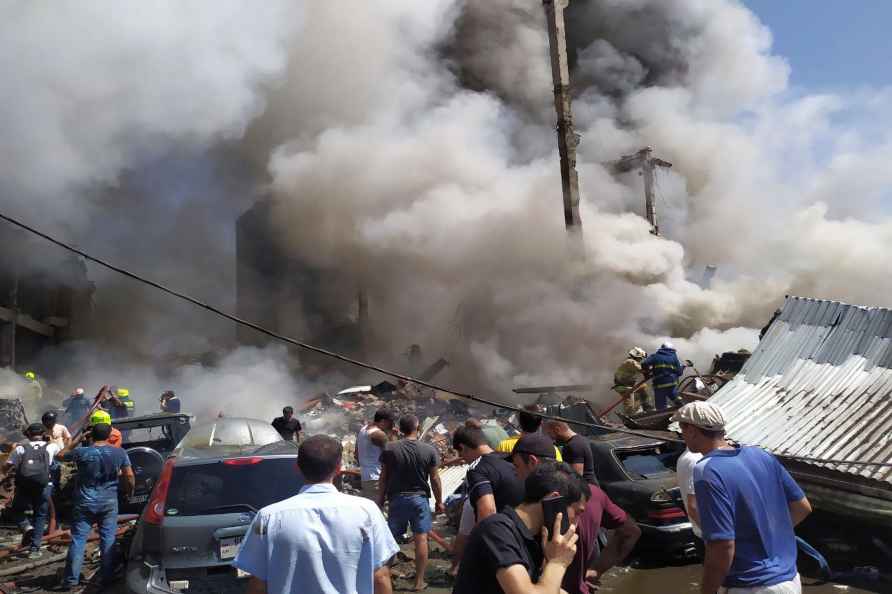 [Smoke rises from Surmalu market about two kilometers (1.2 miles) south of the center Yerevan, Armenia, Sunday, Aug. 14, 2022. A strong explosion hit a large market in the capital of Armenia on Sunday, setting off a fire and reportedly trapping people under rubble. The Interfax news agency cited Armenia's emergency service as saying the explosion occurred in a building at the Surmalu market where fireworks were sold. ( /PTI] Chennai/Mumbai, Aug 14 : The private equity investing community on Sunday was saddened by the sudden death of broker-investor Rakesh Jhunjhunwala. "Saddened by this news. Most unexpected and only 62. He inspired many people to invest in our public markets. And was promoter of a few," Kris Gopalakrishnan, Chairman, Axilor Ventures told IANS. According to investors, Jhunjhunwala started investing in private companies recently. He had invested in standalone health insurer Star Health and Allied Insurance and Akasa Air. "It is indeed a great loss. Particularly when an individual who is helping to create or rejuvenate industries by backing to the hilt. (Akasa Air being the latest example) is lost to us sooner than expected," Sarath Naru, Managing Partner, Ventureast, one of the longstanding venture capital firms in India, told IANS. Jhunjhunwala was forthright with his views. At a conclave organised by a media house, he said that people will laugh at him on hearing him say that they should not buy Zomato shares. At that time the share was orbiting at a higher plane. Jhunjhunwala also said that the market will correct itself. And his words later turned true. "Rakesh Jhunjhunwala: my school and college mate. One year my junior. Believed stock India was undervalued. He is right. Amazingly sharp in understanding financial markets. We spoke regularly, more so during Covid. Will miss you Rakesh!a Uday Kotak, CEO, Kotak Mahindra Bank tweeted. "Great loss of a prescient and prolific investor whose vision of India as a powerful and global economy was inspiring as well as ahead of most others in the industry. His exposure to privates was more recent," Gopal Srinivasan, Managing Director and Chairman, TVS Capital Funds, a private equity company, told IANS. Often referred to as the 'King of Bulls' in the stock markets, Jhunjhunwala's latest venture Akasa Air's maiden flight took off exactly a week ago on August 7, last Sunday. Jhunjhunwala had an estimated net worth of $5.5 billion (as of July 2022), which made him the 36th richest man in India. Jhunjhunwala was also chairman of Hungama Media and Aptech, as well as a director of Viceroy Hotels, Concord Biotech, Provogue India, and Geojit Financial Services. He grew up in Mumbai, where his father was posted as an Income Tax Officer. After graduating from Sydenham College in 1985, he enrolled at the Institute of Chartered Accountants of India. Jhunjhunwala invested Rs 5,000 in capital in 1985 which grew to Rs 11,000 crore by September 2018. He has developed interest in the equity market after listening to his father discussing it with his friends. His father had asked him to read newspapers regularly because news made the market volatile. Jhunjhunwala borrowed money from his brother's client and promised to return the capital with higher returns after his father refused to give money to him. When he bought 5,000 shares of Tata Tea. He made a huge profit in 1986. He earned over three-times profit. In three years he earned Rs 20-25 lakh. He remained an active investor in the market after that and held various stocks in his portfolio. Akasa Air is an Indian airline co-founded by Rakesh Jhunjhunwala and former Jet Airways CEO Vinay Dubey. The airline currently has two aircraft with additional order for 70 more aircraft and flies to three cities as of Aug 9, 2022. After the 2008 global recession, his stock prices fell by 30 per cent, but he eventually recovered from the loss by 2012. By the year 2020, Jhunjhunwala planned to give away 25 per cent of his wealth to charity. He contributed to St Jude, which runs shelters for cancer-affected children, Agastya International Foundation and Arpan, an entity that helps create awareness among children on sexual exploitation. Prime Minister Narendra Modi met Jhunjhunwala and his wife last year. "Rakesh Jhunjhunwala was indomitable. Full of life, witty and insightful, he leaves behind an indelible contribution to the financial world. He was also very passionate about India's progress. His passing away is saddening. My condolences to his family and admirers. Om Shanti,"Modi said on Twitter. /IANS

New Delhi, Sep 12 : After being selected in the India squad for the 2022 T20 World Cup squad in Australia, veteran wicket-keeper batter Dinesh Karthik on Monday shared a heartfelt message on social me […]