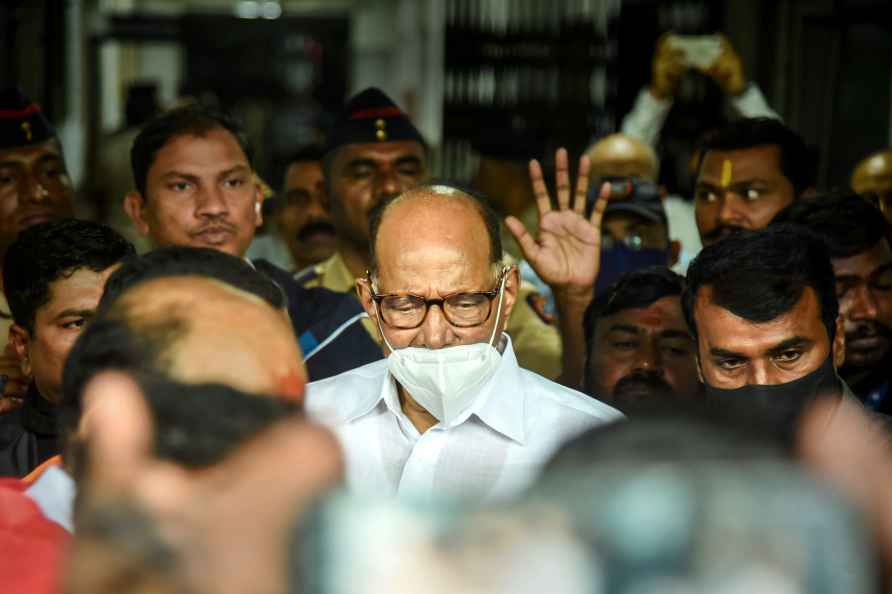 [Navi Mumbai: NCP chief Sharad Pawar comes out after meeting family members of deceased Maratha community leader and Shiv Sangram party chief Vinayak Mete at MGM Hospital Kamothe, in Navi Mumbai, Sunday, Aug 14, 2022. Mete passed away after his SUV met with an accident early Sunday. ( /PTI] Raigad, Aug 14 : Veteran politician and President of Shiv Sangram Party Vinayak -- who espoused the cause of the Maratha community for over 3 decades -- was killed in a road accident on the Mumbai-Pune Expressway here on Sunday morning, officials said. Mete, 52, was coming from Beed via Pune to Mumbai in his SUV to attend a Maratha panel meeting scheduled with top state leaders this afternoon, when the mishap occurred. He was rushed to the MGM Hospital in Kamothe, Navi Mumbai where the doctors declared him dead on admission. A doctor at MGM Hospital later told mediapersons that he didn't exhibit any signs of life and with grievous head, neck and limbs injuries, had been killed instantaneously in the accident. Chief Minister Eknath Shinde -- who rushed to the hospital along with Deputy CM Devendra Fadnavis -- announced a probe into the incident. The Raigad Police have set up eight teams to investigate the accident and shall also interrogate the SUV driver Eknath Kadam, who has survived and also a police bodyguard, who is presently said to be critically injured. Mete was at the forefront of the agitations in the past to demand reservations for the Maratha community which fructified, and he headed a key committee that was executing the project to construct a grand memorial for Chhatrapati Shivaji Maharaj in the Arabian Sea. Mete's body was taken for an autopsy at Sir J.J. Hospital and handed over to his family and taken to his Wadala residence. After keeping it for public 'darshan', the body is likely to be flown to his native Beed district where the funeral is expected to be performed later. According to Raigad Police, around 5.05 a.m., Mete's Ford Endeavour (SUV) was proceeding towards Mumbai when the driver reportedly lost control of the vehicle. The speeding SUV rammed into an unknown vehicle in the lane ahead and crashed beside the road, fatally injuring Mete and seriously hurting the police bodyguard and the driver Kadam. However, owing to some delayed communication, a police team rushed there only after an hour and shifted the three victims to the MGM Hospital. Besides Shinde and Fadnavis, Leader of Opposition Ajit Pawar, Nationalist Congress Party President Sharad Pawar, Shiv Sena President Uddhav Thackeray, state Congress President Nana Patole, state cabinet ministers NCP MP Supriya Sule, Chhagan Bhujbal, Dhananjay Munde, Pankaja Munde, Deepak Kesarkar, and other leaders across the political spectrum grieved Mete's sudden demise. /IANS