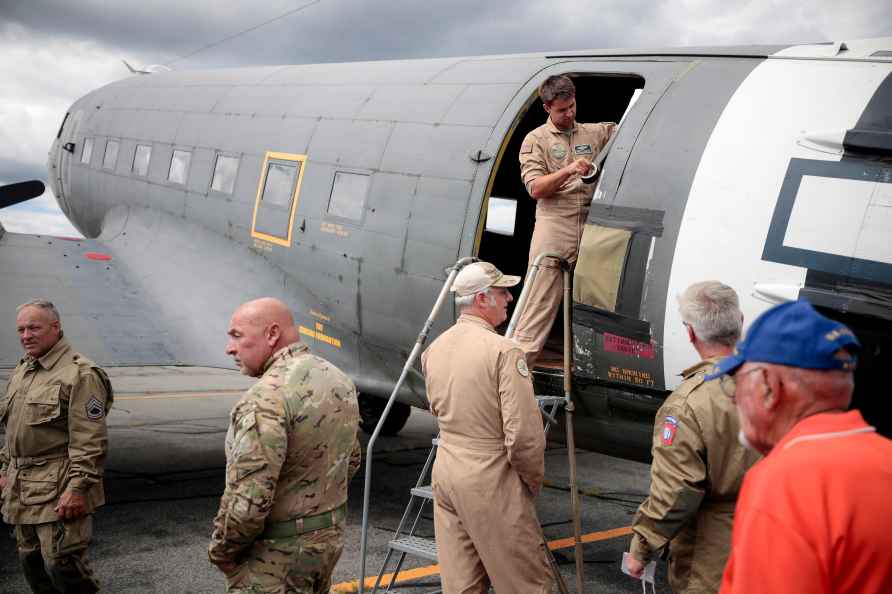 [Pilot Garrett Fleishman tapes the doorway of the Placid Lassie, a vintage C-47 plane, so the sharp edges will not rip the paratroopers' static lines as they jump, ensuring their safe departure from the aircraft, Saturday, Aug. 13, 2022, at the Pittsfield Airport in Pittsfield, Mass. The team made two jumps Saturday in commemoration of the 80th anniversary of the 1942 crash in Peru State Forest, in which a C-53 plane hit Garnet Peak. The crash killed four crew members and 12 paratroopers of the 502nd Parachute Infantry Regiment, 101st Airborne Division, known as "The Screaming Eagles." /PTI] By Kumar Vikram New Delhi, Aug 14 : While the political slugfest between the BJP and the AAP over freebies refuses to end, an Election Commission analysis of the election manifestos of different parties disclosed a marked emphasis on freebies and doles. The Commission in its report found that promises made in the manifestos of political parties include items such as gold coins, cash, land and constructed homes, free cattle and others. The poll panel said such doles are aimed at targeted groups of the electorate - BPL families, weaker sections, women, handicapped, among others - as well as the whole electorate. A total of 17 manifestos were analysed by the ECI to find out if they contained schemes which were freebies or genuine welfare measures. "Some cases could be categorized as either freebie or welfare measure. The manifestos were divided into six categories depending upon the type of promises made in them. These categories were tangible assets (like promise of land to landless labourers), direct transfers either monetary (like packages, financial support, scholarships) or promise of policies and schemes of direct transfer, promise of loans and loan waivers, subsidies and food (like provision of free or subsidized food)," said the report 'Narrative & Statistical Report General Election to Lok Sabha, 2014' released in September 2018. The poll panel report pointed out that some usual freebie items promised were laptops/tablets, grinders, mixers, fans, gold coin, cash transfers, land and constructed houses, cash for all unemployed youngsters, and livestock. These were targeted at urban and rural youth, marginalized sections, farmers, women and senior citizens and tribals. The analysis by the poll panel also suggested that a significantly large number of clauses of freebies/welfare (nearly 43 per cent) had offered direct transfers, either monetary or through policy initiatives along with promises of assets and food subsidies targeted at the poor. Apart from the political debates, the issue of freebies promised by political parties is also being heard in the Apex Court. Chief Justice of India N V Ramana on Thursday acknowledged that the impact of freebies promised by political parties on the country's fiscal health was "a serious issue" but said he was not in favour of derecognising any party over it because that would be "anti-democratic". While considering a plea seeking directions to the Election Commission of India to not permit political parties to promise freebies during election campaigns, the Supreme Court on Thursday stressed on creating a balance between the welfare of the State and the economic strain on the public exchequer. "Economy losing money and the welfare of people, both have to be balanced. That is why this debate and there must be someone to put thoughts to the vision," the CJI said. On August 3, 2022, the Court had opined that an expert body consisting of various stakeholders such as Niti Aayog, Finance Commission, Law Commission, Reserve Bank of India, and members of ruling and opposition parties would be required to give suggestions to address the issue of promise of freebies during election campaigns. To enable the Court to pass an order for the constitution of such a body, the bench directed the petitioner, Central Govern ment and the Election Commission of India to give suggestions. Meanwhile, the political slugfest continued as the BJP on Friday launched a scathing attack on AAP chief and Delhi CM Arvind Kejriwal, calling him a big liar who goes back on all his promises. Leading the BJP charge, Union Minister Pralhad Joshi slammed Kejriwal over his promise of providing free electricity in several states and his tall claims about improving the standard of education in Delhi schools. On the same day, Delhi Deputy Chief Minister Manish Sisodia alleged that the ruling party makes fun of welfare schemes by calling them 'revdi' (freebie) and instead follows a 'Dostwadi' model. /IANS

Ukraine liberates 6,000 sq.km territory from Russia in Sep: Zelensky
[A Ukrainian soldier plays with a dog as he has a rest in the freed territory in the Kharkiv region, Ukraine, Monday, Sept. 12, 2022. Ukrainian troops

Howrah: Security personnel stand guard near barricades, put up to stop BJP supporters from taking part in the party's 'Nabanna Abhijan' (march to secretariat), at Santragachi in Howrah district, Tuesd […]

This time we were extra careful against Trent Boult, says Labuschagne after win in third ODI

Cairns, Sep 12 : Australia batter Marnus Labuschagne has said that playing out the dangerous New Zealand pace bowler Trent Boult's overs without losing too many wickets was the team's strategy in the […]

New Delhi, Sep 12 : The Supreme Court on Monday dismissed a plea of a father to hand over the body of his son, who was killed in the Hyderpora encounter in Kashmir in November last year. A bench […]

Phnom Penh, Sep 12 : Cambodia's National Assembly President Heng Samrin on Monday embarked on a trip to the neighbouring countries of Vietnam and Laos, according to an official statement. During […]