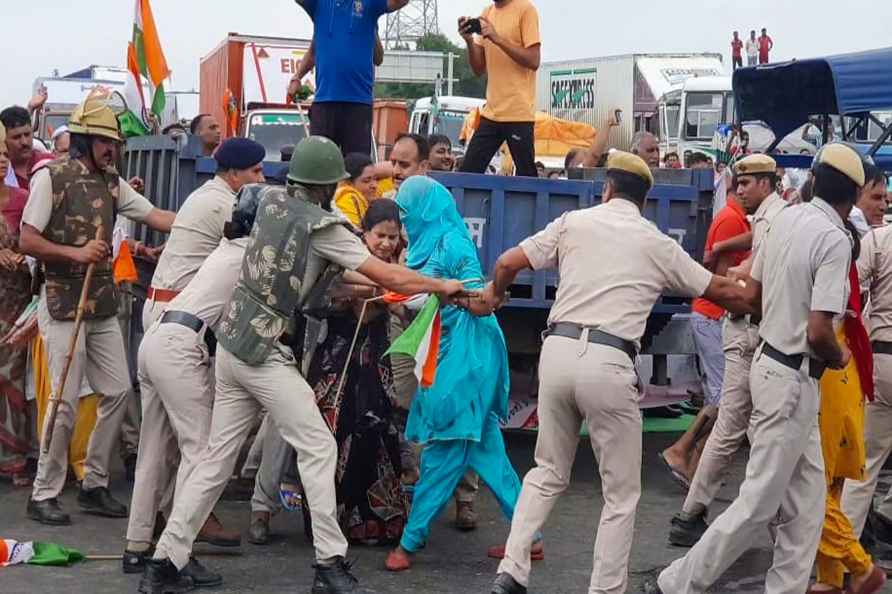 [Gurugram: Police personnel try to disperse farmers, blocking the National Highway-48, during their protest against the proposed acquisition of 1,810 acres of land in three villages of Manesar and demanding adequate compensation, in Gurugram, Saturday, Aug. 13, 2022. ( /PTI] Gurugram, Aug 13 : Thousands of farmers of Kasan, Mokalwas, Sehrawan and other adjoining villages on Saturday blocked the National Highway in Gurugram's Panchgaon Chowk demanding more compensation for the land acquired in their villages by the Haryana government. Holding Tricolours alongside the Delhi-Jaipur Expressway, the protesters, including farmers and villagers, blocked the highway for more than one hour around 1.30 p.m. The protesters alleged "despite the court restrictions, the government is continuing to acquire land since 2011." A senior police official said police force and traffic personnel are on the spot to pacify the protesters. "The traffic movement on the expressway is smooth now, " he said. To block the expressway, the protesters had stopped trucks, tractors and government buses in the middle of the highway. The protesting farmers and villagers alleged that the government had acquired 1,810 acres of land in their villages at just Rs 55 to 90 lakh per acre which is very low in comparison to the current land value. The protesters said that they do not want to surrender their land to the government and want to get their acquired land released. The police used mild force to disperse the protesters to clear the traffic snarls on the expressway. The police have also detained several protesters, including farmer leader Gurnam Singh Charuni, for smooth traffic movement. Meanwhile, due to the protest, the traffic congestion on the expressway stretched over several kms. The commuters on the Expressway faced huge traffic congestion due to sudden protests. The protesting villagers raised slogans against the Haryana Government. They were also raising slogans 'Jai Kisan Jai Jawan' and demanded the state government not to acquire land at a throw-away price. A few months back, a maha panchayat was organised by the villagers and farmers in Kasan village in connection with the matter. At that time, the organisers had discussed their future course of action against the government land acquirement policy. "Years ago, the government had already acquired acres of land of Kasan and adjoining villages. Now, only a few acres of land are spare and if it will be acquired our livelihood will be finished and we are not much educated to opt for another profession. Our only income source is farming but the government want to snatch this as well," said a protesting farmer. "The matter was also raised before the ongoing session in the Haryana assembly in which the Haryana government has accepted that the land price is high but still they do not want to listen to the farmers' voice," another farmer said. /IANS