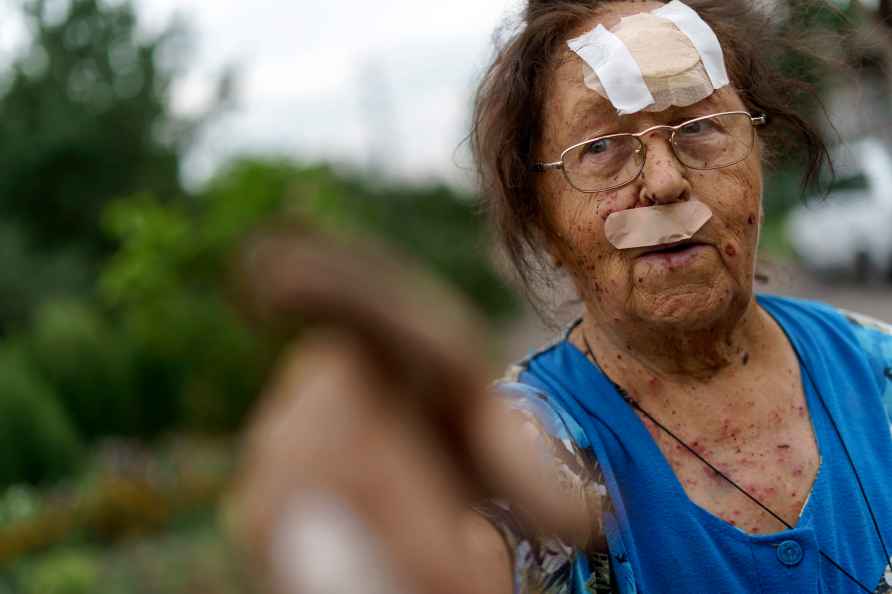 [Valentyna Kondratieva, 75, points to her damaged home, Saturday, Aug. 13, 2022, where she sustained injuries in a Russian rocket attack last night in Kramatorsk, Donetsk region, eastern Ukraine. The strike killed three people and wounded 13 others, according to the mayor. The attack came less than a day after 11 other rockets were fired at the city. ( /PTI] By Quaid Najmi Mumbai, Aug 13 : At an age when most children attended kindergarten and mouthed ABCD, one feisty eight-year-old girl from Saras village in Gujarat, Usha Mehta, joined a protest march of the Independence Movement in 1928, and shouted the slogan, "Simon, Go back", hurling her first brick at the British Raj edifice. Years later, when Usha was 22, she shot into limelight by launching the 'Secret Congress Radio', five days after Mahatma Gandhi's 'Quit India' call on August 8 1942, with the movement to start the following day from the Gowalia Tank (August Kranti) Maidan. Unnerved, the police swooped on the gathering and nabbed all the Indian National Congress (INC) leaders and dumped them in jails, leaving the unguided junior leaders and youngsters to carry forward the 'Quit India' crusade. In barely five days, Usha and her team-mates like Vithalbhai Jhaveri, Babubhai Thakkar, Chandrakant Jhaveri and Nanka Motwani, the owner of Chicago Radio and others, rustled up the 'Secret Congress Radio'. The secret radio, audible on a frequency of 42.34 metres, from 'somewhere in India', made its first not-so-secret hour-long transmission on August 14, 1942, and was beamed live twice or once daily in English and Hindi. Switching locations daily to avert detection by the furious British, the radio aired patriotic songs, messages from the top leaders, slogans, recorded speeches, uncensored news of British atrocities, banned information, certain leaked news pertaining to the Second World War, and other stuff. It electrified the masses and the INC leaders immensely, attracting several aggressive notables and fiery speakers like Dr. Ram Manohar Lohia, Achyutrao Patwardhan, Purushottam Trikamdas and others to broadcast their speeches and even pre-recorded 'content' by Gandhiji, Pandit Jawaharlal Nehru and others. The radio remained highly popular for around 3 months till an 'insider' ratted on the 'secret location', culminating in a police raid in November 1942, the broadcast station shut down, all equipment confiscated with Usha and others shunted behind bars for the next four years at Yerawada Central Jail, Pune, till March 1946. As many leaders acknowledged later, her courage to run a radio station at the height of the WWII (1939-1945) was a commendable feat that helped unite the masses and helped the cause of the Freedom struggle. Born on March 25, 1920, Usha was just five years old when she first had Gandhiji's 'darshan' at the Sabarmati Ashram (founded in 1917) in Ahmedabad, and later attended his workers' camps near Surat, she spun khadi, participated in protest demonstrations and campaigned for total prohibition. All this and more, she managed under the stern eye of her father, Hariprasad Mehta, a Judge under the British Crown, who didn't take kindly to her pro-freedom activities, till he retired in 1930, and then, his 10-year-old jumped into the historic Salt Yatra of Gandhiji when he broke the Salt Act on April 6, 1930. A couple of years later in 1932, the family shifted to Bombay, Usha continued her education here and became even more involved with the freedom movement, then picking up momentum all over the country. After her primary schooling in Kheda and Bharuch and then in Mumbai, she completed her Matriculation in 1935 through Chandaramji High School in Girgaum, and joined the Wilson College (now, 190 years old) at Chowpatty, to graduate in Philosophy with a 1st Class in 1939. Post-Independence ,the 27-year-old Usha returned to her academics, and deeply influenced by Gandhiji, she became a celibate, adopted a frugal Gandhian lifestyle, shunned comforts and luxuries, wore only khadi saris till the end, her white saris with an occasional coloured border, standing out in the crowds, and propounded Gandhian philosophy for the rest of her life. Back to the varsity, she acquired a doctorate and became the popular 'Dr. Usha Mehta', a familiar figure in Mumbai academic and political circles, capping her long career as a student, teacher, professor and then as the Head of Department of Civics & Politics at the University of Bombay, retiring in 1980, aged 60. Ironically, despite playing a memorable role in the independence struggle, on that historic date of August 15, 1947, when India became unshackled with the Freedom at Midnight, Usha lay on the sick-bed as the rigours of her jail term in Pune the previous year took a toll on her frail health. After hanging up her chappals, she got down to a hectic social life, spreading Gandhian ideology through articles, essays, books and speeches, in English and Gujarati. She was elected the President of Gandhi Smarak Nidhi (GSN), which later acquired the historic Mani Bhavan, the home of Sardar Vallabhbhai Patel's daughter Maniben, which hosted Gandhiji on his Bombay trips, and converted it into a memorial to the Father of the Nation, and she was active with the Gandhi Peace Foundation and the Bharatiya Vidya Bhavan. Though Dr. Mehta was decorated with the Padma Shri, Padma Bhushan and Padma Vibhushan, and several events were dedicated to her during the Golden Jubilee of Independence in 1997, her heart was in turmoil with the happenings in the country. Dr. Mehta occasionally aired her agony, saying "this was not the Freedom" that she and others had fought, what with people chasing power over public service, though she admired how the country had progressed on all fronts. In early August 2000, though a bit down in health, she attended the customary anniversary of 'Quit India Day' on August 9 to return home weary and weak, and breathed her last in the night of August 11. Dr. Mehta is survived by her three nephews -- the eminent Bollywood film-maker Ketan Mehta, and two well-known medicos, Dr. Yatin Mehta in Gurugram and Dr. Nirad Mehta in Mumbai. (Quaid Najmi can be contacted at: q.najmi@ians.in) /IANS

Mumbai, Dec 4 : 'Hum angrezon ke zamane ke jailer hai'! This iconic dialogue from the 1975 action drama 'Sholay' is still remembered and much credit for it goes to ace comedian Asrani, who made it imm […]