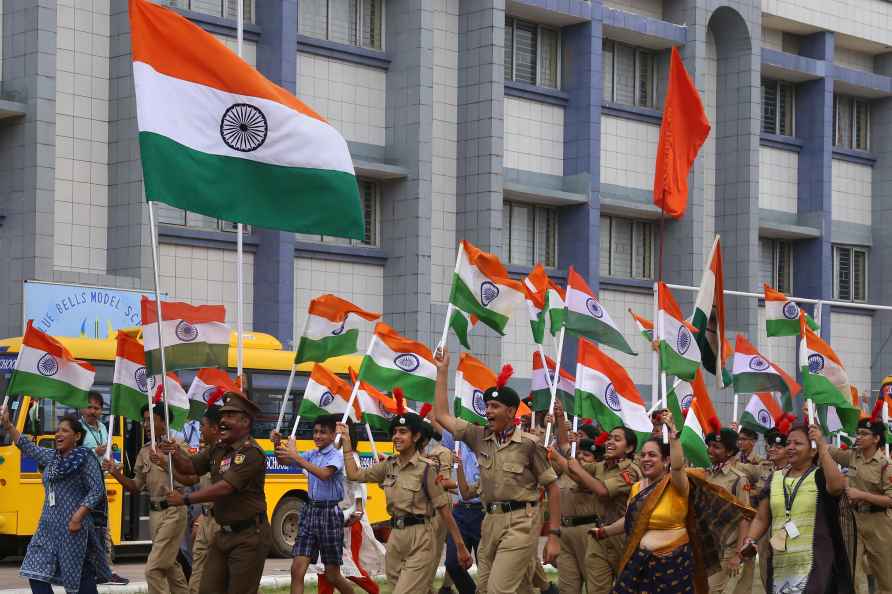 [Gurugram: NCC cadets with school students and staff participate in a 'Tiranga Yatra', organised as part of 'Azadi Ka Amrit Mahotsav' celebrations to commemorate 75 years of Indian independence, in Gurugram, Saturday, Aug. 13, 2022. ( /PTI] Srinagar, Aug 13 : Kashmir University on Saturday continued celebrations related to the 'Azadi Ka Amrit Mahotsav' initiative to commemorate 75 years of independence. On Friday, Vice-Chancellor of the University, Professor Neelofar Khan inaugurated an awareness programme titled 'Background and Importance of National Flag' organised by the School of Law. Addressing a gathering, she said that the law school students and faculty have a greater role to play in raising mass awareness about the importance and significance of the country's national symbols and events. "Our National Flag is our pride and it is the duty of every citizen to respect it," Khan said. Three law students presented papers on the historical perspective of the Tricolour, National Flag Code and the Naveen Jindal Case. The Vice-Chancellor announced a special cash prize for the student speakers. At another celebration in Markaz-i Noor, Shaikh-ul Aalam Centre for Multidisciplinary Studies (SACMS), a one-day seminar was organised titled "Communal Harmony and Co-existence: A Sufi Perspective". Prof G.N. Khaki, Chairman of SACMS, highlighted the role of Sufis and Rishis of Kashmir in facilitating an environment of peace and tolerance in the Kashmir Valley. Prof Peerzada Irshad A. Shah, Chief Librarian, spoke about the importance of peace and revival of lost virtues while living in the present world, while Prof Tareak A. Rather, Director, Institute of Kashmir Studies, spoke about the significance of communal harmony in the current world order and the need to re-emphasise it. Prof Tabasum Firdous, Director CCAS also spoke on the occasion, while Dr Surayia Gull Naqati, Assistant Professor, CCAS, presented a paper on "Communal Harmony and Mystical Thought". The celebrations were attended by enthusiastic students in good numbers to get educated on the country's long struggle that led to the first hoisting of the Tricolour in India. /IANS