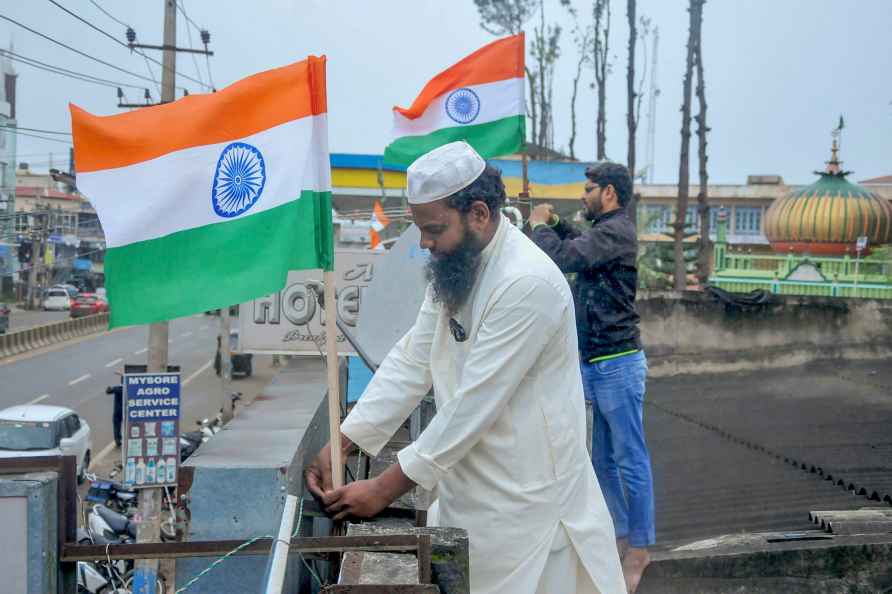 [Chikmagalur: People hoist the national flag at their homes as part of 'Har Ghar Tiranga' campaign under 'Azadi Ka Amrit Mahotsav' celebrations to commemorate 75 years of Indian independence, in Chikmagalur, Saturday, Aug. 13, 2022. ( /PTI] Thiruvananthapuram, Aug 13 : The Centre's 'Har Ghar Tiranga' initiative was kicked off in Kerala to an enthusiastic response transcending all barriers of age, caste and religion on Saturday morning. Initiated as part of 'Azadi ka Amrit Mahotsav' to commemorate India's 75th anniversary of Independence, the campaign will continue till August 15. The program envisages inspiring Indians everywhere to hoist the national flag at their homes and offices. State Minister K.Krishnankutty and K.Balagopal launched the campaign this morning by hoisting the tricolour in their residences. Stealing the show was none other than superstar Mohanlal (Hon Lt.Col) when he raised the flag at his Kochi residence. After he hoisted the Tri-colour, the national anthem was played and all present at the house stood in rapt attention. "Am really proud to have taken part in the 'Azadi ka Amrit Mahotsav,' and the initiative will certainly help to strengthen the love for the country," said Mohanlal to the media. Similar hoisting of the Tri-colours took place at resident associations' offices, clubs, government offices, and homes. /IANS