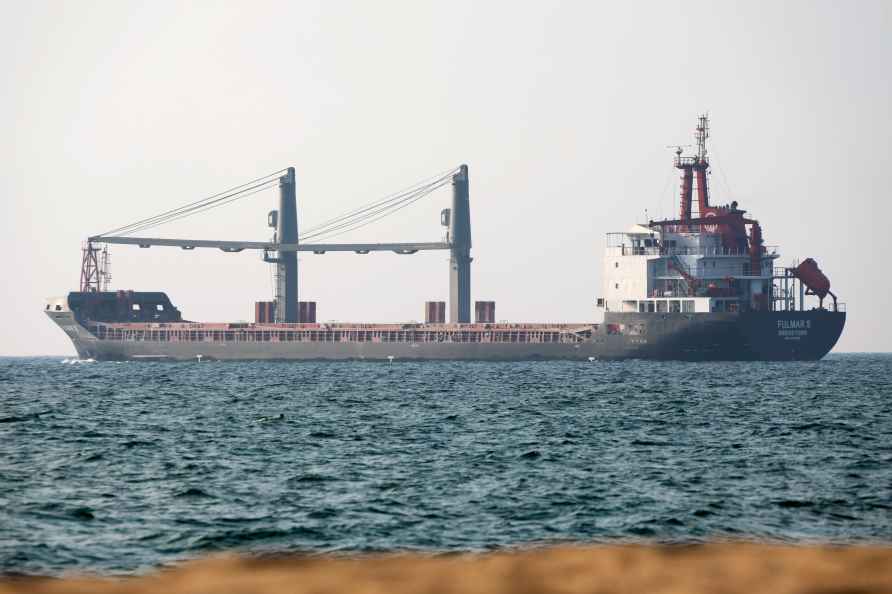 [The Fulmar S vessel carrier with 12000 ton of corn makes its way from the port in Odesa, Ukraine, Saturday, Aug. 13, 2022. Ukraine signed an agreement with Turkey and the U.N. on July 22 clearing the way for Ukraine to export 22 million tons of corn and other grain stuck at ports and in silos since the Russian invasion, and to make room for the export of the upcoming harvest. /PTI] Kiev, Aug 13 : The fifth caravan of ships carrying grain sailed from Ukraine's Black Sea ports under a deal to prevent a global food crisis, the Ukrainian Infrastructure Ministry said on Facebook. The general cargo ship SORMOVSKIY 12 and the bulk carrier STAR LAURA together carrying 63,000 tons of food departed from the ports of Chornomorsk and Pivdenny respectively, the Ministry added on Friday. Later on Friday, two more ships, BRAVE COMMANDER and PETREL S, will arrive at Chornomorsk and Pivdenny ports for loading, the Ministry said, adding that the ships will carry more than 40,000 ton of grain from Ukraine. On July 22, Ukraine and Russia separately signed a deal with Turkey and the UN in Istanbul to resume food and fertiliser shipments from Ukrainian ports to international markets through the Black Sea, Xinhua news agency reported. On August 1, the first cargo vessel carrying grain left the Ukrainian port of Odesa for the port of Tripoli in Lebanon. /IANS