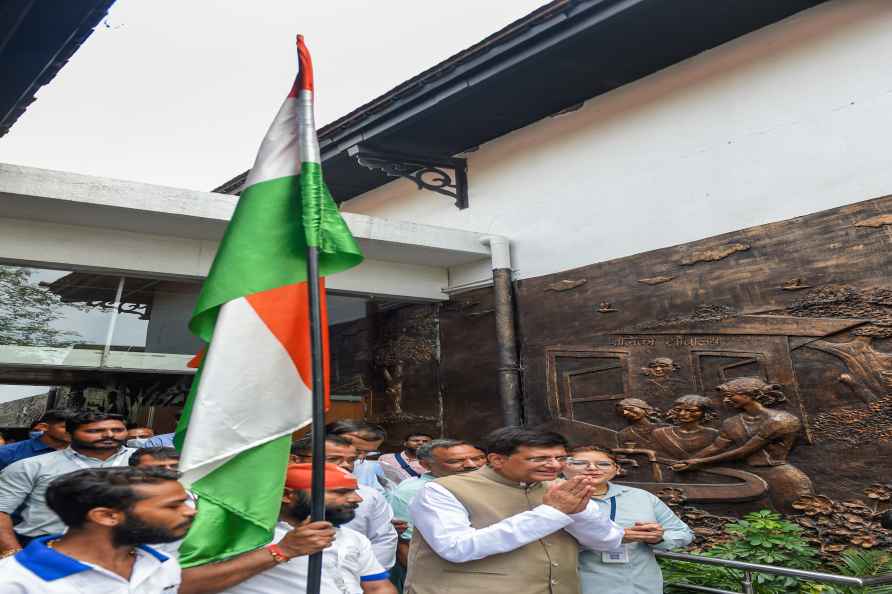 [New Delhi: Union Minister for Commerce and Industry Piyush Goyal arrives to hoist the national flag at Gandhi Darshan Museum, in front of Rajghat on the occasion of 'Har Ghar Tiranga Mahotsav', in New Delhi, Saturday, Aug. 13, 2022. ( /PTI] New Delhi, Aug 13 : Rashtriya Swayamsevak Sangh chief Mohan Bhagwat, Sangh leaders and RSS have removed the display picture of their official social media accounts and replaced it with Tricolour. The RSS on Saturday shared a 48 second video on its official Twitter account in which Bhagwat and other Sangh officials can be seen hoisting Tricolour on different occasions. The move comes in the wake of questions being posed by Congress and other opposition leaders to RSS in context of the Tricolour. On the occasion of 75th anniversary of the Independence, Prime Minister Narendra Modi had appealed to all countrymen to change their DP on social media and put Tricolour on it. In line with the Prime Minister's 'Har Ghar Tiranga' campaign, the RSS has also urged the people to awaken self-respect and tweeted," Celebrate the Azadi ka Amrit Mahotsav. Hoist the Tricolor in every house. Awaken the national self-respect." Making a big issue out of the appeal of the prime minister, Congress leader Rahul Gandhi had said, "Har Ghar Tiranga campaign is being run by those, who (RSS) didn't hoist Tricolour for 52 years." "They could not stop Congress from fighting for the freedom of the country, and they will not be able to stop it today too," the Wayanad MP said. /IANS