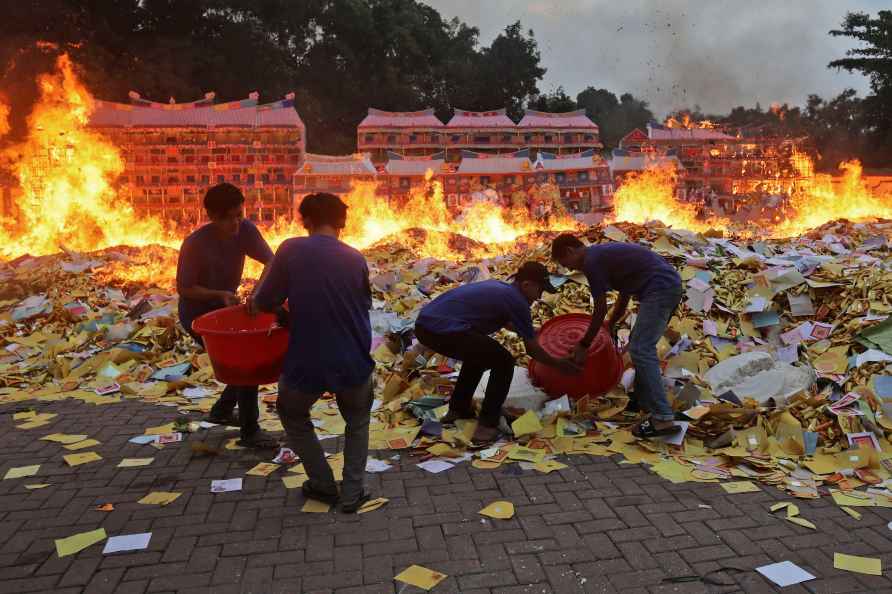 [Ethnic Chinese people burn imitation money known as 'hell money' during the Hungry Ghost Festival in Medan, North Sumatra, Indonesia, Friday, Aug. 12, 2022. The festival is celebrated during the seventh month of the Chinese lunar calendar, when prayers are offered to the dead and offerings of food and paper-made models of items such as televisions and cars are burned to appease wandering spirits as it is believed that the gates of hell are opened during the month and the souls of dead ancestors return to visit their relatives. ( /PTI] Islamabad, Aug 12 : The severe isolation of Afghanistan since the Taliban captured the country's capital a year ago has provided China an opportunity to become a major player in the country, the media reported. Beijing has joined the international community in urging Kabul's new rulers to implement reforms, such as forming an inclusive government with representation for all Afghan ethnicities and respect for women's rights, particularly when it comes to education and work, VOA reported. But China has also promised the Taliban regime economic and development support in exchange for attention to Chinese security concerns -- especially in restraining any Uyghur militant groups in Afghanistan from targeting Chinese interests, particularly Belt and Road Initiative (BRI) projects, in the region, VOA reported. Before the collapse of the Ashraf Ghani-led government, Beijing had a close working relationship with Kabul, and Afghan security forces helped monitor and target Uyghur militant groups at China's request. But since the Taliban's takeover in August last year, Beijing has begun to engage with the new rulers because it does not want terrorism to spill over from Afghanistan into China or target its interests in the region. As no country has yet recognised the Taliban as Afghanistan's legitimate rulers, the millions of dollars in aid that helped prop up the previous government have vanished, billions in state assets are frozen, and economic sanctions have led to a near-collapse of the country's economy. In this situation, the Taliban administration actively courts Chinese investment and financial support, VOA reported. More than seeking a role in post-US Afghanistan, Beijing is worried about the possibility of attacks planned by militant groups such as the Turkestan Islamic Party (TIP), a Uyghur militant group that Beijing blames for unrest in its western province of Xinjiang and refers to by its former name, the East Turkestan Islamic Movement (ETIM). The TIP seeks to liberate Xinjiang and the Uyghur people from Chinese government control and carries out attacks on Chinese interests. The Taliban have also been very consistent in their messaging about not allowing Afghanistan to become a haven for international terrorist groups looking to launch attacks against regional states, particularly China. Recently, Taliban Foreign Minister Amir Khan Muttaqi, at the international conference in Tashkent, offered assurances that "the Islamic Emirate of Afghanistan will not allow any of its own members, or any other individual or group, including Al-Qaeda, to pose a threat to the security of others from the soil of Afghanistan." Ashraf Ghani's administration was long being accused of hosting members of Islamist militant groups such as Tehreek-e-Taliban Pakistan (TTP) and Baloch ethno-separatist groups, which target BRI-linked development projects and Chinese nationals in Pakistan. Islamabad and Beijing had hoped that threats from Baloch insurgents would subside once the Taliban took control of Afghanistan. Following the Gwadar attack, the Taliban detained and expelled a large number of families of separatists from Nangarhar and Nimroz neighbouring provinces, according to Baloch separatist groups, VOA reported. /IANS