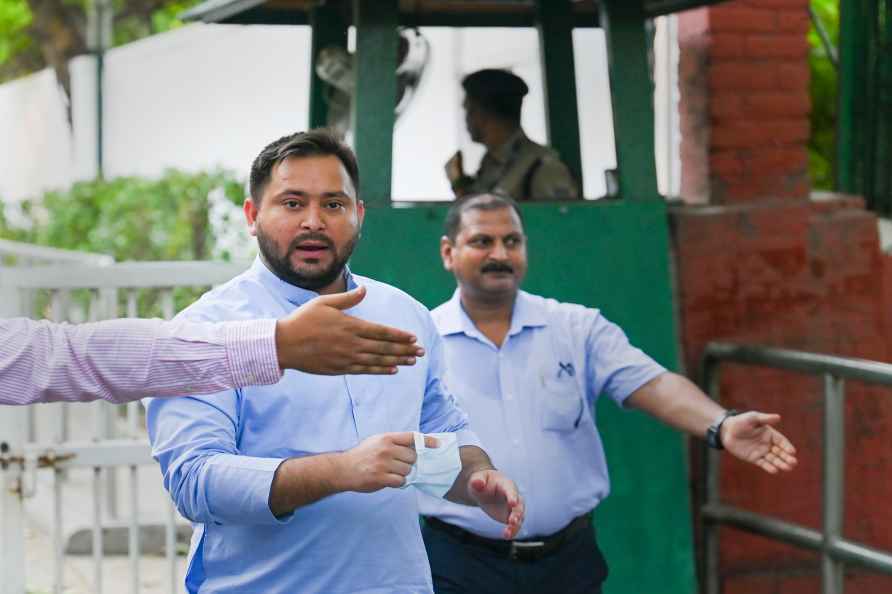 [New Delhi: Bihar Deputy Chief Minister and RJD leader Tejashwi Yadav leaves after meeting Congress interim President Sonia Gandhi, in New Delhi, Friday, Aug. 12, 2022. ( /PTI] New Delhi, Aug 12 : Bihar deputy Chief Minister Tejaswi Yadav will be meeting Congress interim President Sonia Gandhi on Friday, the first time after the formation of a coalition government in the state, sources said. Tejaswi will apprise Sonia Gandhi on the recent political developments, and the two may talk about the probable share of the Congress in the new coalition government, which has 19 MLAs in the state. The meeting gains significance as the cabinet expansion is due in a few days. After taking the oath as the Bihar Chief Minister for the eighth time, Nitish Kumar passed a proposal to call a special session of the Assembly on August 24 -- for him to prove his majority -- and in the Legislative Council on August 25. Bihar Governor Phagu Chauhan has been intimated of the proposal and his approval is awaited. Leaders of the Mahagathbandhan also brought in a no-confidence motion against Speaker Vijay Kumar Sinha, of the BJP. Since he has the support of only 77 MLAs of his own party, it is most likely that he would resign from the post before the motion. RJD's Awadh Bihari Chaudhary is the front-runner for the Speaker's post. On August 25, the Legislative Council will also elect a new Chairman. /IANS