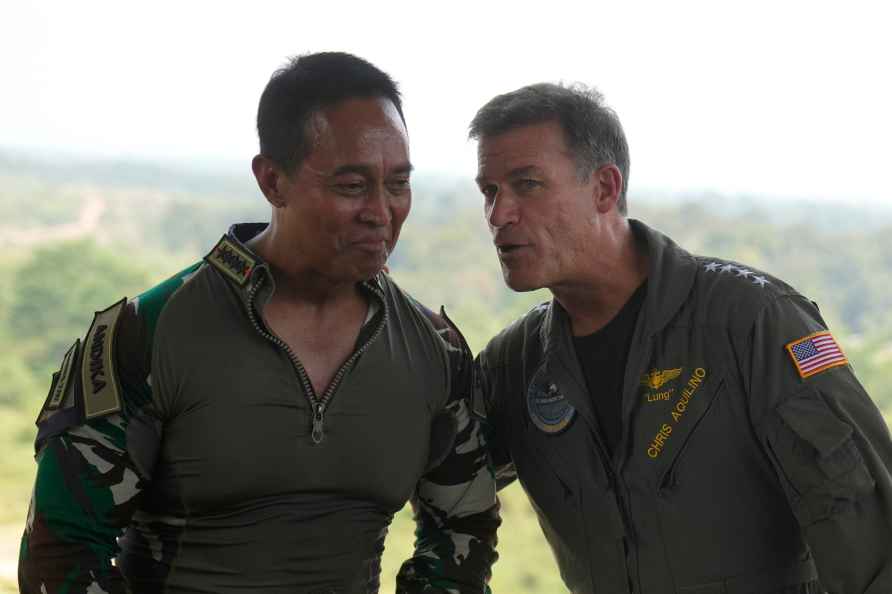 [Commander of the United States Indo-Pacific Command Admiral John C. Aquilino, right, talks with Indonesian Armed Forces Chief Gen. Andika Perkasa during Super Garuda Shield 2022 joint military exercises in Baturaja, South Sumatra, Indonesia, Friday, Aug. 12, 2022. The United States and Indonesian militaries conducted the annual combat exercises on Indonesia's Sumatra island, joined for the first time by participants from other partner nations including Australia, Japan and Singapore, signaling stronger ties amid growing maritime activity by China in the Indo-Pacific region. /PTI] Beirut, Aug 12 : United Nations Interim Force in Lebanon (UNIFIL) has urged Lebanon and Israel to avoid any action which could put the cessation of hostilities on the border at risk, according to a UNIFIL statement. "Blue Line stability should not be taken for granted. Belligerent rhetoric escalates tension and adds to the feeling of apprehension among the local population," said UNIFIL Chief Aroldo Lazaro Saenz on Thursday. The Blue Line is a demarcation line between Lebanon and Israel as well as Lebanon and the Golan Heights published by the United Nations in 2000, Xinhua news agency reported. His remarks came during a tripartite meeting with senior officers from the Lebanese Armed Forces and the Israel Defence Forces at Lebanon's southern city of Ras Al Naqoura to discuss incidents along the Blue Line, continued air violations, as well as other developments and issues. The UNIFIL Chief noted that the parties' engagements, through UNIFIL's established liaison and coordination mechanism, have contributed to preventing any escalation along the Blue Line. "These instruments have again demonstrated their value." Since the end of the 2006 war in south Lebanon, regular tripartite meetings have been held as an essential conflict-management and confidence-building mechanism. /IANS