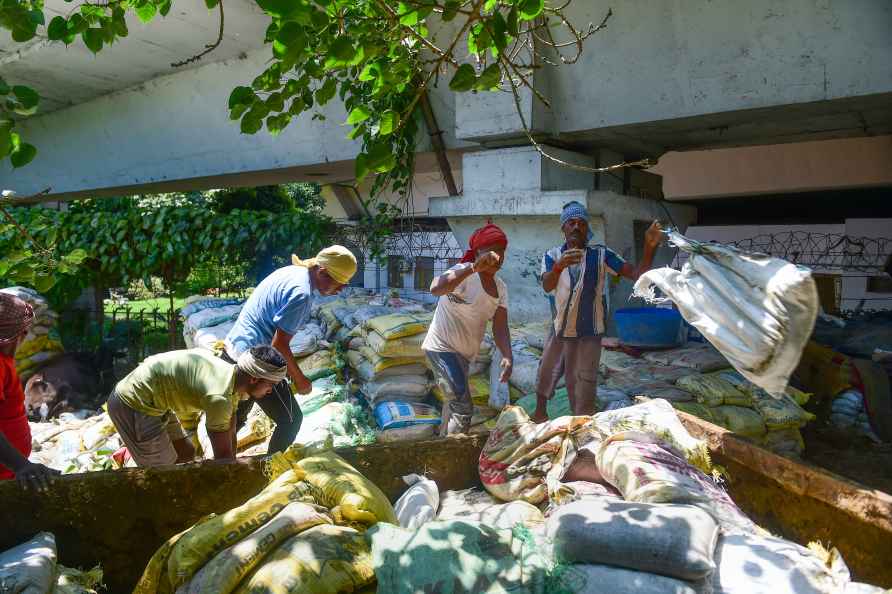 [New Delhi: Workers load sand bags in a vehicle as part of preparations for tackling flood-like situation after a rise in water level of the Yamuna river following monsoon rains in upper catchment areas, in New Delhi, Friday, Aug. 12, 2022. As per authorities, water level of the river is likely to breach the danger mark on Saturday morning. The Delhi flood control room issued a warning on Thursday night. ( /PTI] London, Aug 12 : Drought could be declared for some parts of England on Friday, as Britain bakes in another heatwave. The National Drought Group, made up of government and agency officials, water companies and other groups such as the National Farmers' Union (NFU), is set to meet on Friday to discuss the prolonged dry weather, reports dpa news agency. There are expectations that drought could be declared for some parts of England such as southern and eastern areas, prompting action by agencies and water companies to manage water resources to ensure supplies and protect the environment. It comes as temperatures are set to climb to a peak of 36 degrees over the weekend in the areas covered by an amber warning for extreme heat issued by the Met Office for much of England and Wales. Outside the warning area, in northern England and Scotland, temperatures are expected to be in the high 20s or even low 30s in some spots. The vulnerable are likely to experience adverse health effects and the wider population could also be affected, delays to travel are possible and there is an increased risk of water accidents and fires as more people head to tourist spots. There is also a heat health alert in place from the UK Health Security Agency, with experts advising people to look out for those who are older or with existing health conditions, as well as young children. The Met Office said there could be a "thundery breakdown" to the hot weather on August 15, although it was so far uncertain which areas could see rain. The latest heatwave comes on top of months of low rainfall, leaving the countryside, parks and gardens parched and at risk of wildfires breaking out. The Met Office's fire severity index (FSI), an assessment of how severe a fire could become if one were to start, is very high for most of England and Wales, and will reach "exceptional", the highest level, for a swathe of England stretching to the border with Wales by the weekend. In London, where record-breaking heat in July prompted a number of devastating fires around the capital, fire chiefs are urging people not to barbecue in open spaces or balconies, to put out their cigarettes properly and dispose of rubbish correctly. London Fire Brigade said its control room had sent firefighters to deal with 340 grass, rubbish and open land fires during the first week of August, an eightfold increase on the 42 during the same week last year. /IANS