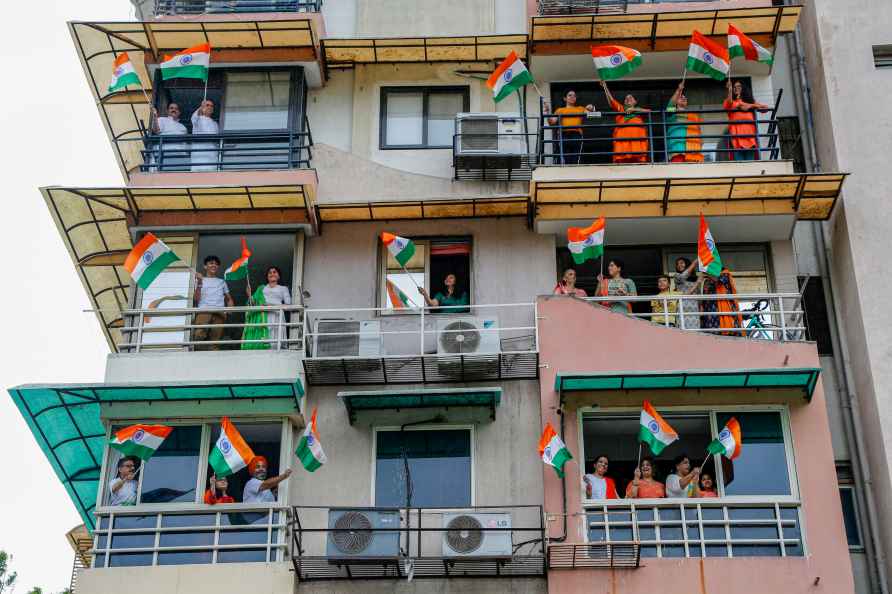 [Ahmedabad: People holding the national flags stand on the balconies of their houses for the 'Har Ghar Tiranga' campaign under 'Azadi Ka Amrit Mahotsav' celebrations to commemorate the 75th anniversary of India?s Independence, in Ahmedabad, Friday, August 12, 2022. ( /PTI] New Delhi, Aug 12 : As part of 'Har Ghar Tiranga' campaign, the BJP Minority Morcha has presented the national flag to Darul Uloom Deoband in Uttar Pradesh. The BJP minority wing has planned to hoist the national flag at religious places and institutions across the country as part of the campaign. BJP minority morcha national president Jamal Siddiqui told IANS that they presented Tiranga to Maulana Salman Bijnori and Maulana Munir Nazim of Darul Uloom Deoband in Saharanpur district of Uttar Pradesh. "While preparing for 'Har Ghar Tiranga' campaign at the 'Azadi Ka Amrit Mahotsav', we went to Darul Uloom Deoband in Saharanpur and presented the national flag to Maulana Salman Bijnori and Maulana Muneer Nazim and appealed them to join the campaign,a Siddiqui said. BJP minority morcha leaders and workers are requesting the minority religious places and institutions to hoist the Tricolour at their premises. "The workers of BJP minority morcha are requesting community and religious leader to hoist the Tricolour at Mosques, Gurudwara, Churches and institutions to become part of of 'Azadi ka Amrit Mahostav' and to remember and pay tribute to great freedom fighters," Siddiqui said. The BJP Minority Morcha has arranged 'Tirangas' made by women in Kashmir for presenting to religious places and institutions. "We have appealed to all the religious leaders and heads of institutions to celebrate this festival together by hosting Tiranga in their premises," Siddiqui added. As per the initial plan, all the National Executive Committee (NEC) members of the BJP Minority Morcha will be given a minimum 75 national flags for hoisting at religious places and institutions. Under the 'Azadi ka Amrit Mahotsav' a programme 'Har Ghar Tiranga' will be organised from August 13 to 15 in which Tricolour will be hoisted at 20 crore houses across the country. In his monthly radio address 'Mann ki Baat' on July 31, Prime Minister Narendra Modi had said, "By becoming a part of this movement, from August 13 to 15, you must hoist the Tricolour at your home, or adorn your home with it. The Tricolour connects us, inspires us to do something for the country. I also have a suggestion that from August 2 to 15 all of us can place the Tricolour in our social media profile pictures." /IANS

New Delhi, Sep 12 : As per the National Health Accounts report released on Monday, the Total Health Expenditure (THE) on the country has been estimated Rs. 5,96,440 crores, which translates into 3.16 […]

Kolkata, Sep 12 : The ruling Trinamool Congress will move a motion in the assembly against the "hyperactive" drives by central agencies like the Central Bureau of Investigation and the Enforcement Dir […]