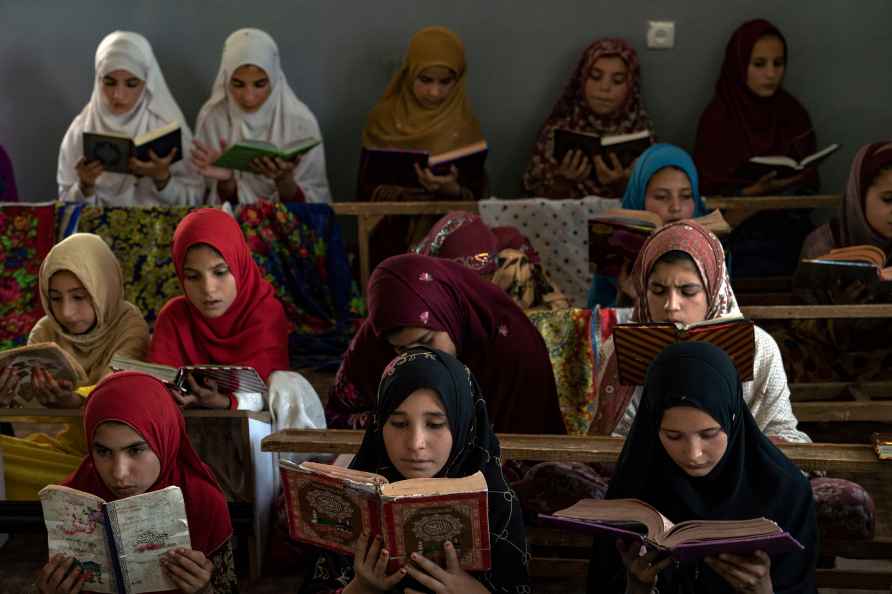 [Afghan girls read the Quran in the Noor Mosque outside the city of Kabul, Afghanistan, Wednesday, Aug 3, 2022. Maulvi Bakhtullah, the head of the mosque, said that the number of girls who come to this mosque to learn Quran has multiplied after the closure of public schools. For most teenage girls in Afghanistan, it?─¶s been a year since they set foot in a classroom. With no sign the ruling Taliban will allow them back to school, some girls and parents are trying to find ways to keep education from stalling for a generation of young women. /PTI] By Sumi Khan Dhaka, Aug 12 : A fresh controversial row has erupted after a top Bangladesh Nationalist Party (BNP) leader told his followers that his party was preparing for violent street protests to oust the ruling Awami League (AL) government led by Bangladesh Prime Minister Sheikh Hasina rather than fight it politically in elections. "By all means we should not face election -- we do find the latest move by the Election Commission to reach out to us satisfactory but we won't fight any election," said prominent BNP leader Mirza Abbas. However, AL Chief Sheikh Hasina has asked her party leaders and workers to fight against any such conspiracies to create unrest and trouble in the country such as BNP -Jamaat's targeted bombing on public buses and attack on law enforcers back in 2013 when the party boycotted the election and later carried out such violent attacks both to foil the war crimes' trial and bring down the Hasina-led government. These threats from prominent BNP leaders comes within a month following an earlier warning by BNP's Volunteer Wing Secretary, who threatened Bangladesh Prime Minister Sheikh Hasina with "a repeat of 1975," referring to the massacre of her entire family in a military coup at that time. Such repeated threats by the BNP have compelled the Bangladesh Home Ministry to take a serious view because the month of August evokes grim memories of the 1975 coup that killed the whole family of Bangabandhu Sheikh Mujibur Rahman, the founder of the country and 'Father of the Nation'. Sheikh Mujibur Rahman's daughters Sheikh Hasina and Sheikh Rehana survived the attack as they were protected by the then Indian Prime Minister Indira Gandhi. Amid the failure of killing the entire Bangabandhu's family, on August 21, 2004, a grenade attack nearly killed Hasina. However, nearly 30 AL workers, including some top leaders died. BNP leader Tarique Rahman, then in power in 2004, stands convicted by the court after a long judicial process, as the mastermind of the plot to kill Hasina in direct collaboration with radical elements. Jamaat-e-Islami, a militant outfit and a key ally of BNP, has been ramping up efforts to reach out grassroots through formation of village unit committees. Tarique and his mother Khaleda Zia have lived up to the legacy of her late husband, General Zia-ur-Rahman, Bangladesh's first military ruler, who turned the clock back on the country's "unfinished revolution" by setting in motion a process of 're-Pakistanisation', which culminated in his successor General H.M. Ershad declaring Islam as the state religion of Bangladesh, says Bangladesh watcher Sukhoranjan Dasgupta, He mentioned that Sheikh Hasina carries forward her father Bangabandhu's legacy of national liberation and the dream of 'Sonar Bangla' (Golden Bengal). This is the legacy of the fight for independence from Pakistan amid the worst genocide in South Asia, Dasgupta said. BNP Secretary General Mirza Fakhrul Islam Alamgir directed his party leaders and activists to "hit the streets to overthrow the Sheikh Hasina-led government". "Sit on the streets and oust this government." Fakhrul said that while addressing a protest rally before the National Press Club on Tuesday afternoon. In continuous threat to boycott election, the BNP Secretary General announced this. /IANS