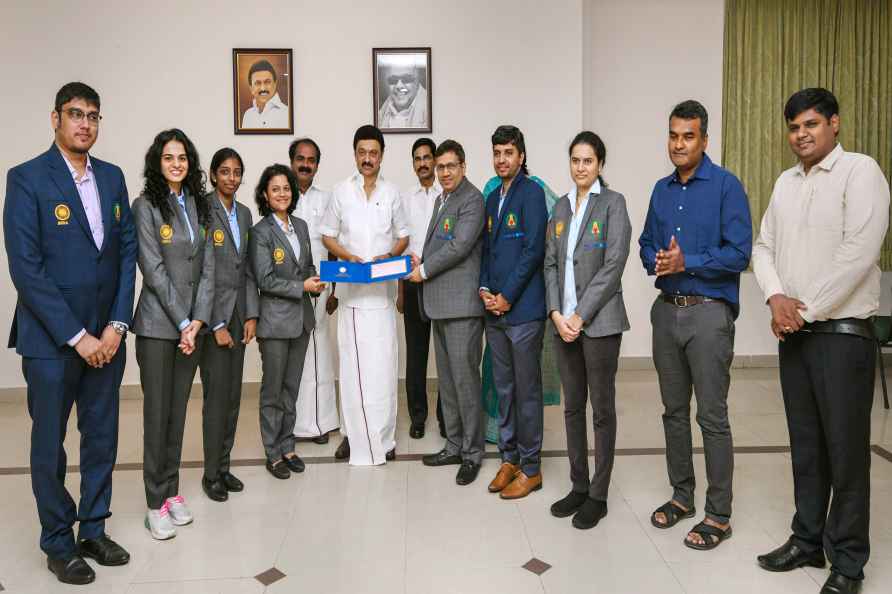 [Chennai: Tamil Nadu Chief Minister M K Stalin presents a cheque of Rs 1 crore each to India-B and India-A women's team for winning bronze medals in the 44th FIDE Chess Olympiad, in Chennai, Wednesday, Aug. 10, 2022. ( /PTI] Lucknow, Aug 10 : Chief Minister Yogi Adityanath has announced that the Uttar Pradesh government will honour eight sportspersons who have made the state and the country proud by winning medals at Commonwealth Games (CWG) in Birmingham. The chief minister said on Wednesday that under the new sports policy, the government had recently announced that players who win medals at international events would be given 'due respect and position.' "The government will honour the sportspersons of the state who participated in the CWG. As per the sports policy, the government will give jobs and additional benefits to those who won medals," he tweeted. Under the new policy, a cash prize of Rs 1 crore would be given to the gold medallist, Rs 75 lakh to the silver medallist and Rs 50 lakh to the bronze medal winner. Additional Chief Secretary Navneet Sehgal said all the medallists will also get the rank of a gazetted officer. The felicitation ceremony is likely to be held in the first week of September, Sehgal added. Those from Uttar Pradesh who won medals in the Commonwealth Games are Priyanka Goswami who won a silver medal in 10-kilometre walk, Deepti Sharma of Meerut and Meghna Singh of Bijnor as well as Lalit Upadhyay of Varanasi who bagged silver medals in women's cricket and hockey, respectively. Similarly, Vijay Kumar Yadav of Varanasi, Divya Kakran of Muzaffarnagar, Annu Rani of Meerut and Vandana Kataria have bagged bronze medals for the country in judo, wrestling, javelin throw and women's hockey, respectively. Besides eight medallists, five other players from Uttar Pradesh will get Rs 5 lakh each from the government for participation in the Commonwealth Games, Sehgal said. The five sportspersons are Meerut's Seema Poonia (discus throw), Varanasi's weightlifters Poonam Yadav and Poornima Yadav, Jaunpur's Rohit Yadav (javelin throw) and Sambhal's Sarita Yadav (hammer throw. The 2022 Commonwealth Games were held in Birmingham, England from July 28 to August 8. /IANS

By Sheikh Qayoom Srinagar, Sep 20 : Lt governor Manoj Sinha said on Tuesday that opening of a multiplex in Kashmir is part of the socio-economic revolution sweeping J&K during last 3 years. W […]

Swiss National Bank raises its key interest rate from -0.25 per cent to 0.5 per cent in biggest hike ever, to fend off inflation, reports AP.

Swiss National Bank raises its key interest rate from -0.25 per cent to 0.5 per cent in biggest hike ever, to fend off inflation, reports AP. […]