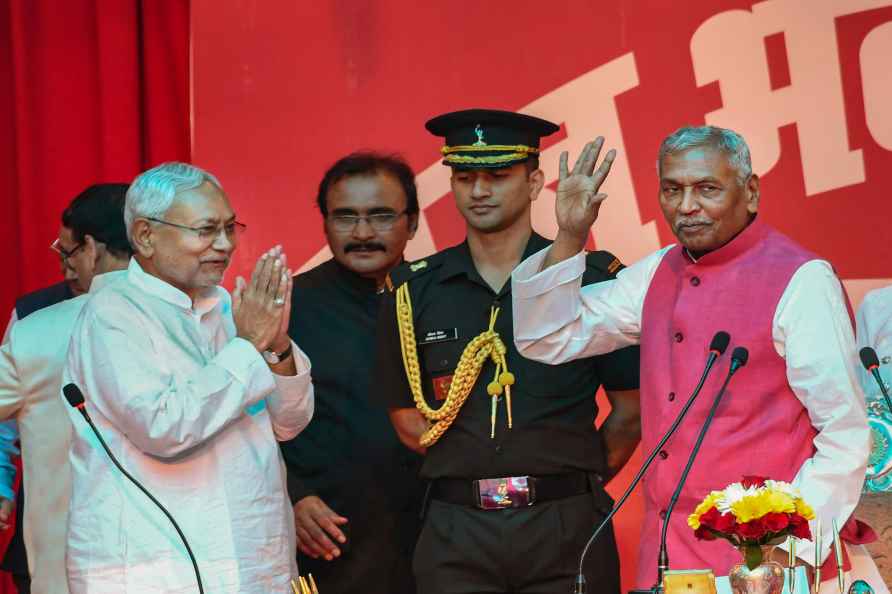 [Patna: JD-U leader Nitish Kumar being greeted by Governor Phagu Chauhan after he was sworn-in as the Chief Minister of Bihar, during a ceremony at Rajbhawan in Patna, Wednesday, Aug. 10, 2022. ( /PTI] Patna, Aug 10 : With Nitish Kumar and Tejashwi Yadav set to take oaths as chief minister and deputy chief minister of Bihar on Wednesday, the going for BJP will sure not be smooth in the state. Soon after the JD(U)-BJP split, a police official pasted "former" against the name plate of deputy chief minister Tar Kishore Prasad. According to sources, the new government will go hard on BJP leaders and workers if they caught on the wrong sie of the law. The primary objective of the new Nitish Kumar government is to destroy the structural organisation of BJP and RSS in Bihar, they added. Kumar may give Tejashwi Yadav a charge to carry out a "surgical strike" on BJP and RSS sympathisers. If they were involved in any communal activities, strong action can be expected in a bid to weaken the structures of the saffron brigade. BJP has Saptrishis and Panna Pramukh which work at booth levels. The new government under the leadership of Nitish Kumar is likely to target those workers. JD-U has already levelled serious allegations against the BJP that it was involved in weakening the structure of former. Now, it is the right time to weaken the BJP and RSS in Bihar like Chief Minister Mamata Benerjee did in West Bengal ahead of the crucial 2024 Lok Sabha elections. BJP is already being criticised for price rise of essential commodities, apart from unemployment, terrorism, national security etc. It is also facing anti-incumbency sentiments across the country and Nitish Kumar, who is considered as having one of the sharpest political brains in the country, knew what would be the ideal time to take the position of his party. Sources have said that BJP is aiming for "Opposition Mukt Bharat" in the country. Now, the opposition leaders are doing just the opposite and alienating BJP. Tejashwi Yadav on Tuesday said that BJP has no alliance partners in North India except Uttar Pradesh where extremely smaller parties are in alliance with it. BJP state president Sanjay Jaiswal has decided to stage a dharna outside the party office. He has also asked leaders of his party to do the same at district, block and Panchayat level. Notably this time, the BJP has not taken an agressive stance after losing the government in Bihar. The ED, CBI, Income Tax effect are not being used by the central leadership as the JD(U) only hinted about the proof (Telephonic audio conversation) it has to expose the saffron leaders. In case BJP uses the central agencies against Nitish Kumar or the leaders of Mahagathbandhan, he would use those proofs to ruin the image of BJP leaders. That may severely hit the preparation of BJP for the 2024 Lok Sabha election. During the tenure of JD(U)-BJP government in Bihar, scandals like Srijan scam, Muzaffarpur shelter home case and others took place which are with CBI. Nitish Kumar has also raked up some of the corruption cases against BJP ministers like Ram Surat Rai, who is facing charges of transfer-posting scam in the land reforms and revenue ministry , which he was owning during the JD-U-BJP combined government. Tar Kishore Prasad, the former chief minister of Bihar is also facing the charges of scam in the "Har Ghar Nal Ka Jal" programme when he was involved in allotting some contracts to his family members and relatives. /IANS

Mumbai, Sep 12 : The All-India Senior Selection Committee met on Monday to pick India's squads for the upcoming ICC Men's T20 World Cup in Australia and for the T20I series against Australia and South […]

Hyderabad, Sep 12 : The human immune system can't produce the defence molecules against the Delta variant as effectively as against the other variants of coronavirus, revealed a study. Dr. Krish […]