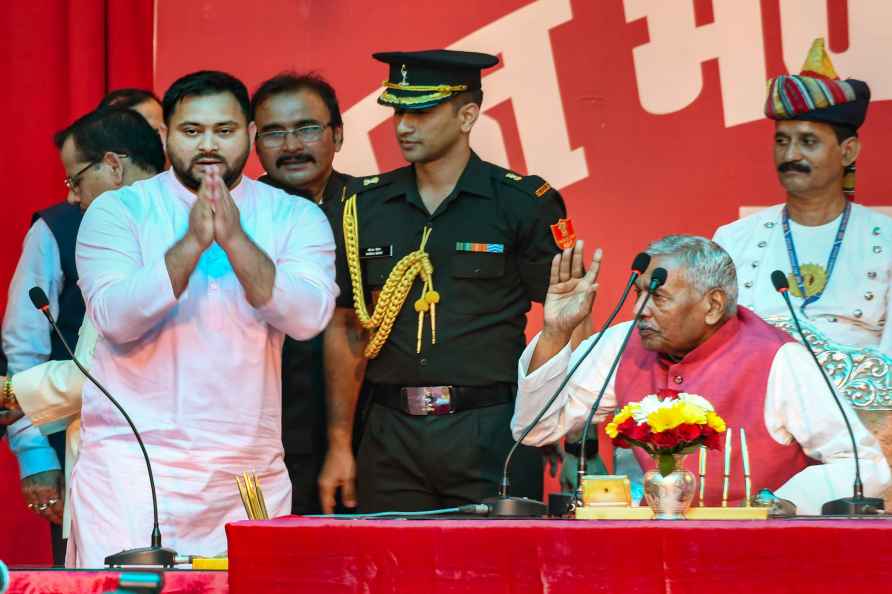 [Patna: Rashtriya Janata Dal leader (RJD) Tejashwi Yadav with Bihar Governor Phagu Chauhan before being sworn in as Bihar Deputy Chief Minister during a ceremony at the Raj Bhavan, in Patna, Wednesday, Aug. 10, 2022. ( /PTI] Patna, Aug 10 : A day after announcing a new grand alliance with the Rashtriya Janata Dal and other opposition parties after breaking away from the BJP, Nitish Kumar on Wednesday took oath as the Bihar Chief Minister for the eighth time. Along with him, Tejashwi Yadav, the RJD leader, took the oath of deputy CM. A swearing-in ceremony was held in the Rajendra Mandapam of the Raj Bhawan here where the two leaders took the oath. Tejashwi Yadav, after taking the oath, touched the feet of CM Nitish Kumar and took his blessings. Nitish Kumar also greeted Tehashwi Yadav warmly. Before going to the Raj Bhawan, Nitish Kumar spoke to RJD Chief Lalu Prasad over the phone. After taking the oath, CM Nitish Kumar said: "After the 2020 Assembly election I did not want to become the chief minister of Bihar. Our party faced a loss after going with the BJP. The situation went worse in the last two months," Kumar said. During the event, former Chief Minister Rabri Devi, Tej Pratap Yadav, Tejashwi's wife Rajshree Yadav and other leaders of JD(U) and RJD were present at the venue. After the swearing-in ceremony, Rabri Devi said: "The new government will be beneficial for building of the state and the country." When asked about the mistakes made during the last RJD tenure, she said that her party will do good work in the interest of the common people. "Due to the blessings of God and the way the media presented all these things in the past, we came into power. We thank each and every person of Bihar, the media persons and everyone," Rabri Devi said. Tej Pratap Yadav also said that the government under the leadership of Nitish Kumar will work for the youths. Nitish Kumar, became the chief minister of Bihar in March 2000, November 2005, November 2010, February 2015, November 2015, July 2017, November 2020 and August 10, 2022. Tejashwi Yadav had taken the oath of deputy CM of Bihar in November 2015 and now on August 10, 2022. /IANS

Spielberg: Mining personal history for aThe Fabelmans' was very hard to get through

Los Angeles, Sep 12 : Filmmaker Steven Spielberg has said that mining his family history to make 'The Fabelmans' was a "very daunting experience" that was at times "very, very hard to get through". […]

Seoul, Sep 12 : A proposed bill that bans the recording of phone calls and conversations without consent has prompted a debate on the boundary of privacy in a country where recorded clips of conversat […]

1 die, many injured as bus falls into ditch in Kerala's Idukki

Thiruvananthapuram, Sep 12 : A passenger died while several others were injured when a Kerala State Road Transport Corporation (KSRTC) bus fell into a ditch in Kerala's Idukki district on Monday. […]

Los Angeles, Sep 12 : Former One Direction member Harry Styles has finally debuted his dramatic chops, charming the Toronto International Film Festival at the world premiere of 'My Policeman'. A […]