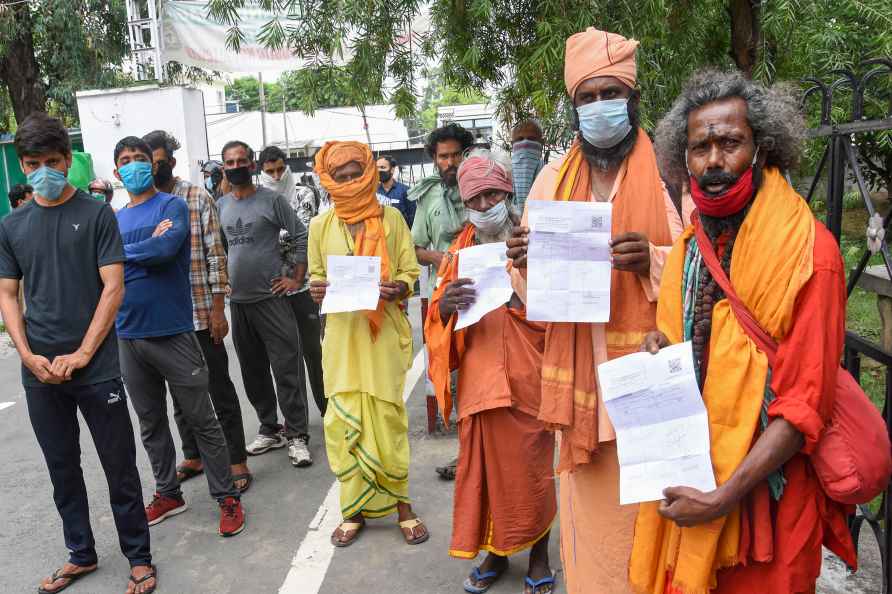 Jammu, Aug 10 : The annual Yatra of Baba Budha Amarnath has concluded in J&K's Poonch district. The Yatra of the 'Chari Mubarak' (Lord Shiva's Mace) that marks the end of Baba Budha Amarnath annual pilgrimage, was taken out on Tuesday morning from Dashnami Akhada temple in Poonch District. Pithadishwar Swami Shri Vishwatmanand Sarswati Maharaj led the yatra in which thousands of devotees from across the union territory participated. The Chari Mubarak was taken out amid tight security arrangements with a heavy deployment of police, army and paramilitary forces. After passing through Chandak, the Yatra of Chari Mubarak concluded at Poonch Mandi temple of Baba Shri Budha Amarnath where the concluding prayers were offered on Tuesday late evening. Officials said that the devotees will keep coming for paying obeisance at the temple till the festival of Raksha Bandhan festival, but officially the pilgrimage has concluded. It is believed that this ancient Shrine of Lord Shiva, is situated at the place in Himalayas, where Rishi Pulatsya -- the grandfather of the King Ravana of Lanka -- had worshiped for many decades. Pulast River flowing down from Loran-Mandi mountains of Pir Panjal (Himalayas) to Poonch and Pakistan occupied part of J&K has been named after this great Saint. The Chari Mubarak will remain in the temple for two days and will be brought back on the day after the Raksha Bandhan on August 11. /IANS

Karnataka HC doesn't have expertise to interpret Quran, petitioners in hijab row to SC
New Delhi, Sep 12 : Petitioners in the hijab ban case on Monday told the Supreme Court that Karnataka High Court faulted by holding wearing of the hea

Special flight with 8 cheetahs to land in Gwalior, not Jaipur

PM Modi, world leaders come 'together for the region' at SCO Summit

[**EDS: HANDOUT PHOTO MADE AVAILABLE FROM PIB ON FRIDAY, SEPT. 16, 2022** Samarkand: Prime Minister Narendra Modi attends the 22nd Meeting of Council of Heads of State of the Shanghai Cooperation Orga […]

New Delhi, Sep 14 : Observing the "sorry state of affairs" in the running of the Table Tennis Federation of India (TTFI) and the need to revamp it, the Delhi High Court-appointed Committee of Administ […]