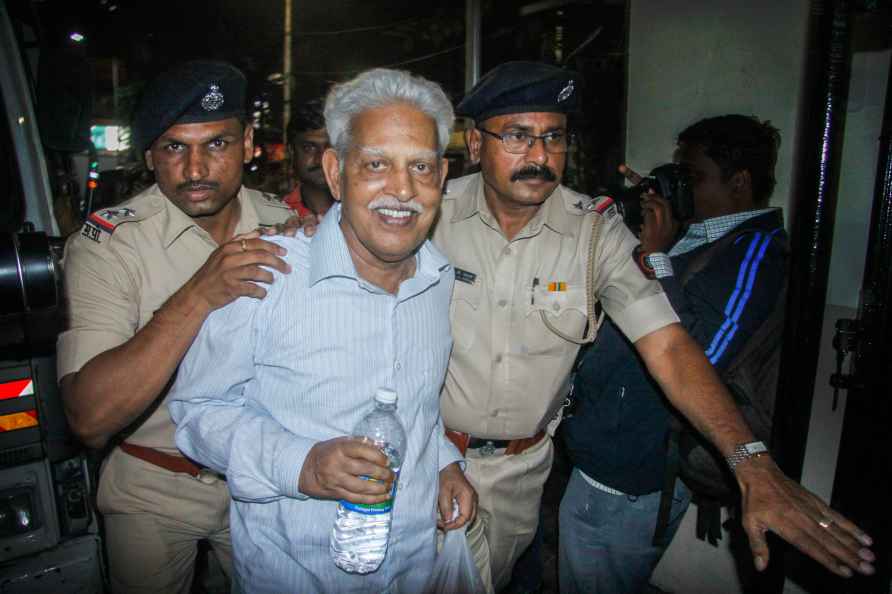 [**EDS: FILE PHOTO** New Delhi: In this Aug 29, 2018 file photo, writer P Varavara Rao being produced at a court in Pune. The Supreme Court Wednesday, Aug 10, 2022, granted bail to Rao, an accused in the 2018 Bhima Koregaon violence case, on medical grounds. ( /PTI] New Delhi, Aug 10 : The Supreme Court on Wednesday granted bail to 82-year-old P. Varavara Rao, an accused in the Bhima-Koregaon case, rejecting NIA's opposition that neither age nor medical condition can become a factor for bail to an UAPA accused. A bench headed by Justice U.U. Lalit said the bail is only on medical grounds and this order would not impact the case of other accused or the appellant on the merits. The top court said Rao shall not in any way misuse his liberty and he should not be in touch with any witnesses. Additional Solicitor General S.V. Raju, representing NIA, vehemently opposed the submission of appellant and contended that material shows Rao is involved in deep rooted conspiracy and under UAPA, he would not be entitled for bail. Senior advocate Anand Grover, representing Rao, submitted that taking into account the age and ailments being suffered by his client, release on bail ought not be limited to grant of time and may be granted without such condition. Grover urged the top court to extend medical bail suitably. Rao had moved the top court challenging the Bombay High Court's order of April 13, which declined his request to stay at his home in Telangana. However, the high court extended the period of temporary bail for three months against the backdrop of medical reasons. In the plea, Rao submitted before the top court that any further incarceration would ring the death knell for him against the backdrop of his advancing age and deteriorating health, which is a fatal combination. /IANS

No plans to set up any plant in Punjab: BMW

Chennai, Sep 14 : The BMW Group on Wednesday categorically refuted reports of setting up an auto component plant in Punjab. "BMW Group India has no plans for setting up additional manufacturing operat […]