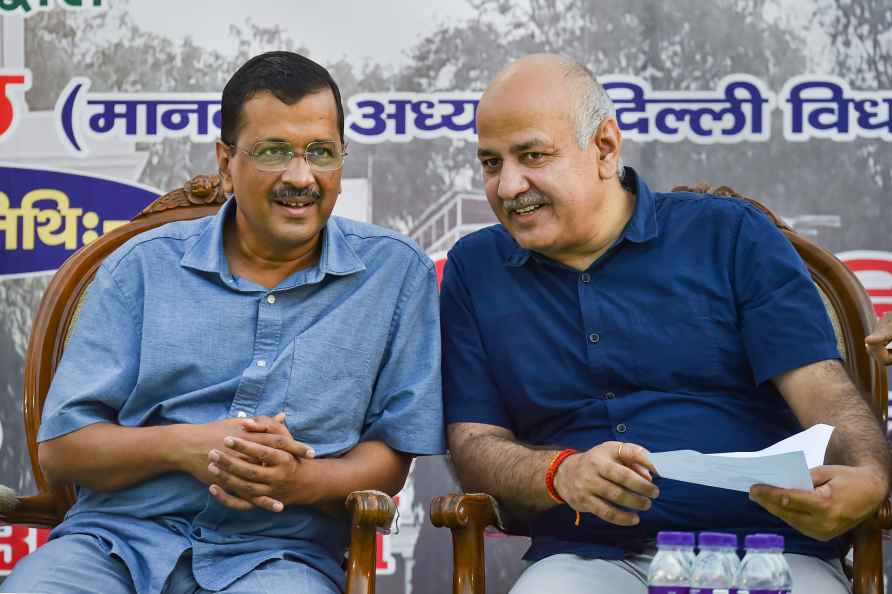 [New Delhi: Chief Minister of Delhi Arvind Kejriwal with Deputy CM Manish Sisodia during the unveiling ceremony of 'Corona Warriors Memorial' and Renovated 'Phansi Ghar', in the Delhi Legislative Assembly complex, Tuesday, Aug. 9, 2022. ( /PTI] New Delhi, Aug 9 : Raising doubts and allegations against LG's decision has become norm, ever since AAP formed the government in Delhi, said former LG Anil Baijal on Tuesday refuting Deputy Chief Minister Manish Sisodia's charges against him. "The allegations now made by Manish Sisodia are baseless and are motivated against me," said Baijal, adding that they are nothing but blatant lies and falsehood being perpetrated by a desperate man to save his own skin. Baijal said that Sisodia is trying to find some alibi for his and his colleagues' acts of commission and omission. Earlier, Sisodia has accused ex-LG Baijal of changing his stand over opening liquor vends in unauthorised areas and claimed that it led to a loss of thousands of crores of rupees to the Delhi government. Sisodia also sought the Central Bureau of Investigation (CBI) probe into it. The former Lt Governor also said that he had flagged the AAP government's unlawful decisions during the implementation of new Delhi Excise Policy which had to be amended on files. He said that these facts are now in the public domain. "In the matter of not allowing liquor vends in non-conforming areas, I discharged my constitutional responsibility of upholding the laws of the land. No law in Delhi, even today, allows for the opening of liquor vends in non-conforming areas," he said. In view of the multiple cases which came to be filed during that period and their pendency in courts and further in view of various observations made therein, I had decided to set up a committee under the chairmanship of VC-DDA with Divisional Commissioner, Excise Commissioner, Commissioner's of DMC's, Secretary (IT) and Representative of National Institute of Urban Affairs, MoHUA as its members to examine the setting up of liquor vends in non-conforming areas, Baijal added further in his statement. The former LG further said that it appears that the AAP Government of Delhi and its Excise Minister initially claimed record revenue through excise by manipulating figures, but when that got utterly exposed, they are now playing this deplorable game of blaming me, by distorting facts and painting a false narrative. Current Delhi LG V.K. Saxena also expressed grave objection to the deliberately misleading, baseless & motivated allegations made by Deputy CM Sisodia & other AAP leaders. Saxena has advised Chief Minister Arvind Kejriwal to ensure that his colleagues in the government and party, refrain from such petty behaviour and statements. /IANS

Rome, Sep 12 : Juventus came back from 2-0 down to settle for a 2-2 draw against Salernitana in a topsy-turvy Serie A game with four red cards, in which Arkadiusz Milik saw his last-gasp winner wiped […]