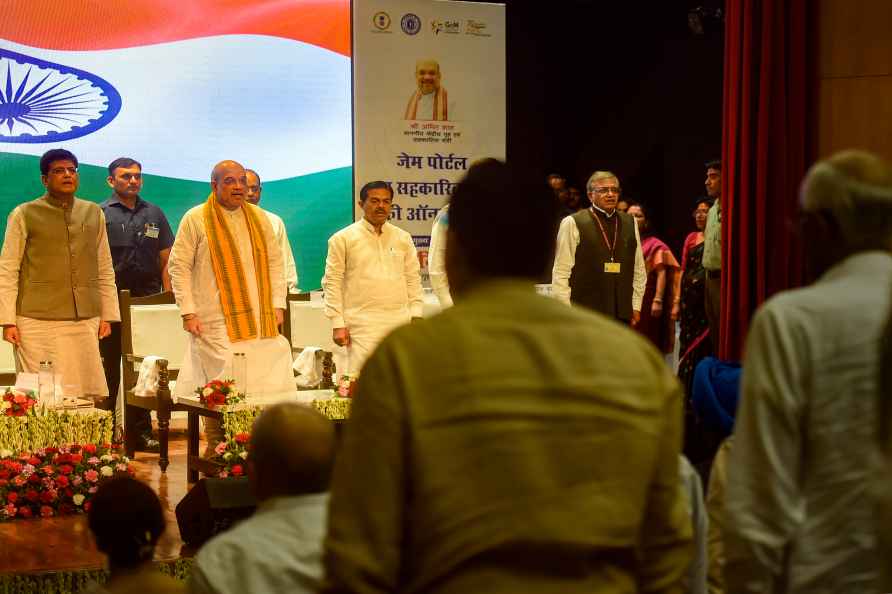 [New Delhi: Union Minister of Home Affairs and Co-operation Amit Shah with Union Minister for Commerce and Industry Piyush Goyal and Union MoS for Co-operation B L Verma during the launch of the onboarding of cooperatives on the Government e Marketplace (GeM) portal, in New Delhi, Tuesday, Aug 9, 2022. ( /PTI] Bhubaneswar, Aug 9 : People are in no mood to accept the politics of nepotism, Union Home Minister Amit Shah said here on Monday, adding the family-based parties would either have to change themselves or be ready to face electoral defeats, Launching the Odisha Chapter of "Modi@20" book, Shah said dynasty, appeasement and corruption had plagued the politics of this country as well as eroded all democratic values after 1960s. "However, Prime Minister Narendra Modi has done the biggest work by eliminating nepotism from democracy. All the family-based parties used to move forward considering nepotism as their capital. But PM Modi replaced the politics of nepotism with politics of performances," said Shah. Giving the example of Uttar Pradesh, the BJP leader said: "Our party won four elections (two Lok Sabha and two Assembly elections) consecutively in a state like Uttar Pradesh, where dynastic and caste politics were deep-rooted." All family parties will either have to change or be ready to face defeat again and again, he said. Shah further said that appeasement means converting a particular section into vote bank by providing special benefits and sabotaging the process of development by disregarding the fundamental right of equal opportunity for all in democracy. PM Modi also ended the politics of appeasement. Today, in the schemes made for crores of poor people of the country, no one can allege that any discrimination has been done, he said, adding, everyone got a similar profit, but no one got a special benefit. "Similarly, PM Modi has curbed corruption in this country. In past 8 years, our opponents have not been able to level a single allegation of corruption against the Modi government. "In 2014, the people of the country took a historic decision giving BJP a two-thirds majority and formed the first full majority government after 30 years. After this change happened, corruption ended, decisive leadership came, policy paralysis ended," the Union minister said. "PM Modi always succeeds because the speed of his thinking is upwards, like the flame of a lamp... his victory is certain in 2024," he added. The BJP will also form a government in Odisha too, he claimed. /IANS

Patna, Sep 14 : A day after unidentified criminals went on an indiscriminate shooting spree across Bihar's Begusarai district, killing one and injuring 10 others, police have detained five persons on […]

Mumbai: Union Finance Minister Nirmala Sitharaman launches a handbook on 'Banking and Finance' and another for 'MSME's on Exports' during the 'Laghu Udyog Bharati Maharashtra Adhiveshan', in Mumbai, F […]

Shillong, Sep 14 : Amid the strong opposition from various circles against the issuance of licences to operate casinos in Meghalaya, the state government has issued licences to set up three casinos in […]