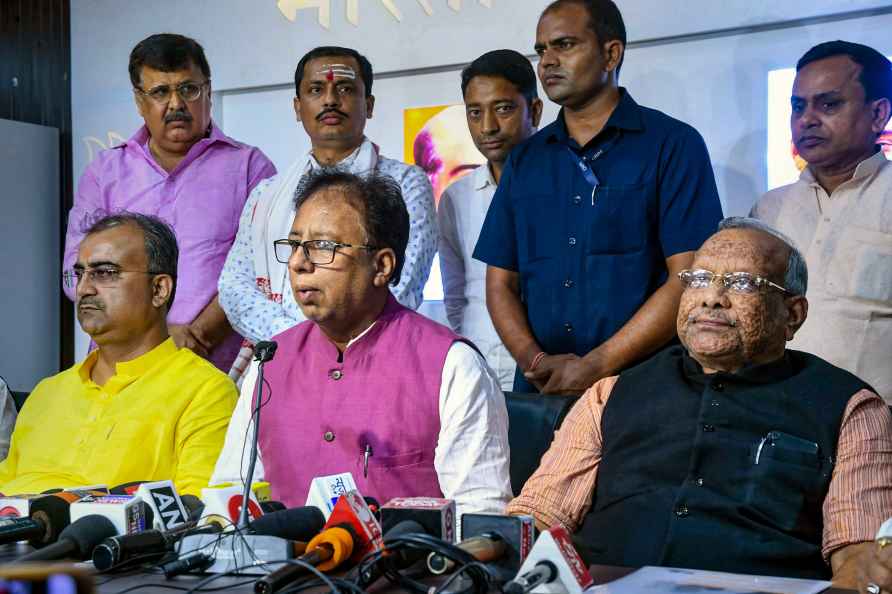 [Patna: Bihar BJP President Sanjay Jaiswal with Bihar Deputy CM Tarkishore Prasad addresses a press conference after the resignation of Bihar Chief Minister Nitish Kumar, in Patna, Tuesday, Aug. 9, 2022. ( /PTI] Patna, Aug 9 : Following Bihar Chief Minister Nitish Kumar's resignation and announcement of leaving the NDA on Tuesday, state BJP President Sanjay Jaiswal termed it a clear case of cheating with people of Bihar and his party. "Whatever happened in Patna on Tuesday, is a cheating with the people of Bihar and BJP," he said. "During the 2020 Assembly election, the people of Bihar had given the mandate to the NDA. Our PM Narendra Modi and HM Amit Shah fulfilled their promises and gave the post of Chief Minister to Nitish Kumar. The way Nitish Kumar broke the alliance, the people of Bihar would not forgive him. He has insulted the mandate of people," he said. Former Union Minister and former JD-U leader R.C.P. Singh also claimed that Nitish Kumar cheated the mandate of 2020 Assembly election by breaking the alliance with the BJP. BJP hardliner and Union Minister Giriraj Singh claimed that Nitish Kumar is wanting to compete with Prime Minister Narendra Modi, and hence, he went with RJD's Tejashwi Yadav. "There is a discussion going in the political circle that Nitish Kumar is the front runner in the race for Prime Minister. Hence, he is going with Tejashwi Yadav. There is no vacancy in BJP, hence he executed his 'paltimar' (switchover) plan. The BJP always takes Nitish Kumar forward. In the 2020 Assembly election, JD-U had only 43 seats, still BJP made him Chief Minister of Bihar," Singh said. "Tejashwi Yadav used the word 'Paltu Ram' for Nitish Kumar. I cannot say something like what Tejashwi said for him. Nitish Kumar is responsible for breaking the alliance with the BJP," he added. /IANS