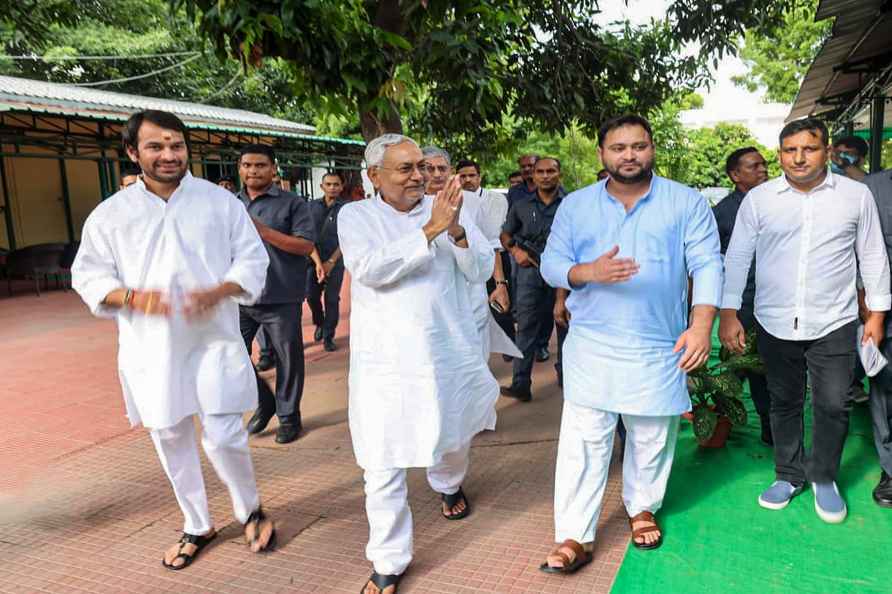 [Patna: Janata Dal (United) leader Nitish Kumar with Rashtriya Janata Dal leaders Tejashwi Yadav and Tej Pratap, in Patna, Tuesday, Aug. 9, 2022. Kumar, Tuesday submitted his resignation from the post of Bihar's CM to Governor Phagu Chauhan. ( /PTI] Patna, Aug 9 : Amid a day of fast-moving political developments, Bihar Chief Minister Nitish Kumar announced his resignation after meeting Governor Phagu Chauhan on Tuesday. Nitish Kumar, who went to Raj Bhavan alone, announced his resignation to the waiting media after coming out. "I was the chief minister of Bihar. Now, I have given my resignation from the post of Chief Minister," he said. Asked about the dispute between him and BJP, he left the question unanswered. Earlier, addressing a meeting of lawmakers of his Janata Dal-United, Nitish Kumar, sources said, levelled allegations against the BJP, saying it was conspiring against him and trying to influence JD-U MLAs to rebel against him. Sources said that Nitish Kumar accused the BJP of "horse trading" and giving some party leaders lucrative offers to make them ministers. He said that he has proof of this. Meanwhile, JD-U MLAs have been asked to stay inside CM's residence. The Rashtriya Janata Dal also asked MLAs of Mahagathbandhan to stay in senior leader and former Chief Minister Rabri Devi's residence at 10 Circular Road until the decision of the Governor comes. It is learnt that Nitish Kumar is expecting the Governor to invite him to form the government again, as he has submitted signatures of his party's MLAs, as well as those of the Mahagathbandhan before Bihar governor. Technically, the RJD is the single-largest party in the Assembly and after Nitish Kumar's resignation, the Governor may invite its leader Tejashwi Yadav to form the government. However, as Tejashwi Yadav has already given documents of support of Mahagathbandhan MLAs of Mahagathbandhan to Nitish Kumar, he may recommend the name of Nitish Kumar only. /IANS

Bhubaneswar, Sep 12 : The Visakhapatnam-Kirandul passenger special train (No. 08551) has been derailed mid-way between Jeypore and Chatriput stations in Odisha, a railway official said. "After p […]

By Hamza Ameer Islamabad, Sep 12 : Former Pakistan Prime Minister and Chairman of Pakistan Tehreek-e-Insaf (PTI), Imran Khan has claimed repeatedly that the reason behind his ouster from power th […]