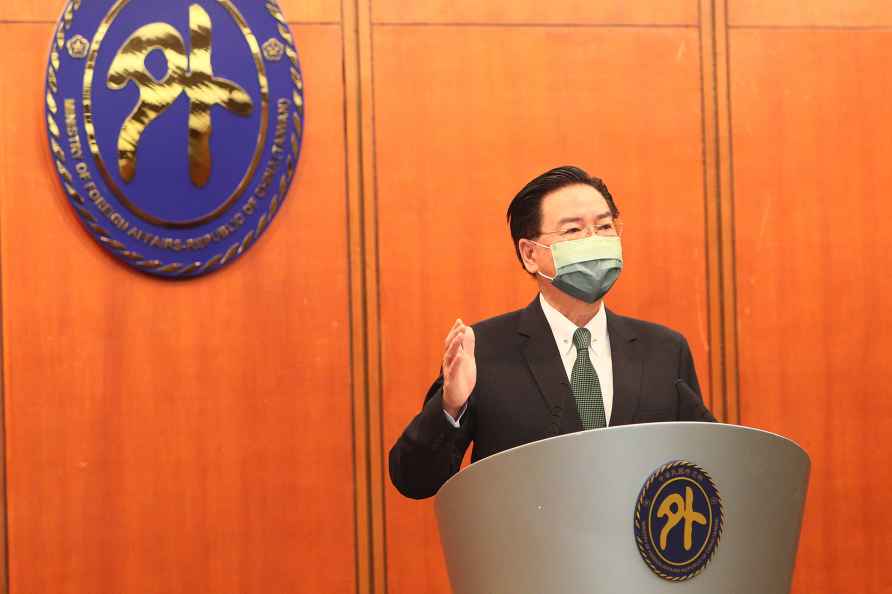 [In this photo released by the Taiwan Ministry of Foreign Affairs, Taiwan's Foreign Minister Joseph Wu speaks during a press conference in Taipei, Taiwan on Tuesday, Aug. 9, 2022. Wu on Tuesday said that China aims to control the East and South China Seas via the Taiwan Strait, describing a greater ambition to upend the Asian status quo and prevent nations from aiding the self-governing island. /PTI] Taipei, Aug 9 : Taiwan on Tuesday conducted scheduled live-fire artillery exercises amid China's ongoing military manoeuvres around the island. The live ammunition artillery exercise known as the Tien Lei drill was announced in late July, before the visit of US House Speaker Nancy Pelosi to Taiwan last week drew Beijing's ire, reports dpa news agency. The drill was designed to simulate Taiwan's defence against an attack by China's People's Liberation Army. It is taking place on Tuesday and Thursday this week and was planned as part of Taiwan's annual Han Kuang exercises, but comes amid heightened tensions and just after China said it would extend large-scale air and sea drills to the north, south-west and east of Taiwan that had been due to end on Sunday. No new formal end date has been announced for China's drills, and Beijing's Defence Ministry confirmed its combat exercises were continuing around Taiwan on Tuesday. Taiwanese television meanwhile reported that flares were fired in coastal areas during Taipei's military exercise in Pingtung County in the island's south, near a zone previously designated by the Chinese army for its own drill. Taiwan's Foreign Ministry condemned China's continuation of military manoeuvres and said Beijing's activities show it is determined to link the East and South China Seas through the Taiwan Strait and make the entire area its internal waters. "China's real intention behind these military exercises is to alter the status quo in the Taiwan Strait and the entire region," Taiwan's Foreign Minister Joseph Wu told a news conference on Tuesday in Taipei. Wu said China's large-scale military exercises, missile launches and cyberattacks were all part of Beijing's "military playbook to prepare for the invasion of Taiwan". He said they were strategies to "weaken public morale" on the island. Beijing could try to make such military action routine after its drills conclude, Wu said, echoing some Chinese media commentators who said the military exercises could become a regular occurance. Taiwan is a self-governing democratic island off the south-east coast of China, which claims it as a province and which it has threatened to take by force if it makes any moves towards formal independence. Beijing rejects official contact between Taipei and other countries. /IANS

We are making progress in making India a manufacturing hub: PM Modi at SCO summit.

We are making progress in making India a manufacturing hub: PM Modi at SCO summit. […]

For resilient supply chain, better connectivity and giving transit rights to each other will be important: PM Modi at SCO summit.

For resilient supply chain, better connectivity and giving transit rights to each other will be important: PM Modi at SCO summit. […]

SCO should try to create resilient supply chain in our region: PM Modi at SCO summit.

SCO should try to create resilient supply chain in our region: PM Modi at SCO summit. […]