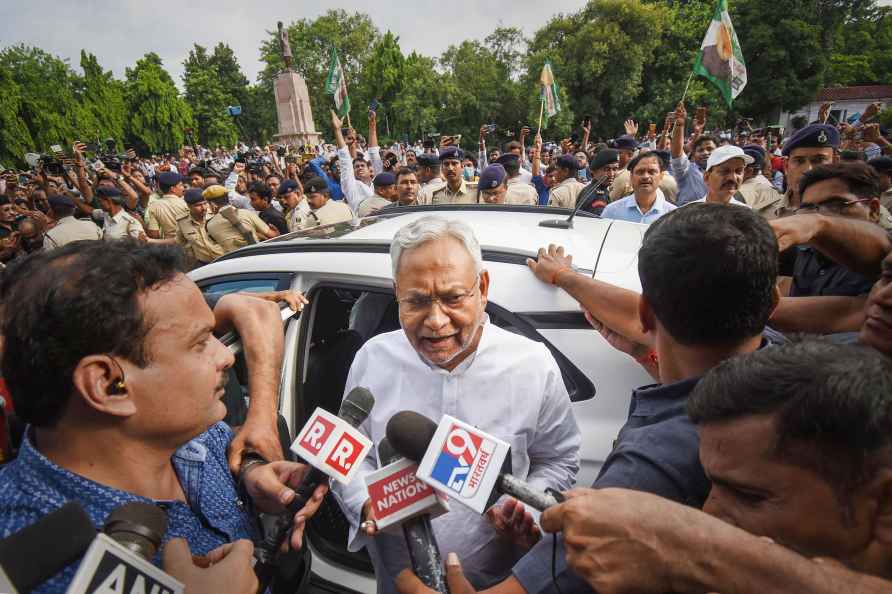 [Patna: Janata Dal (United) leader Nitish Kumar interacts with the media after submitting his resignation to Bihar Governor Phagu Chauhan, outside Raj Bhavan in Patna, Tuesday, Aug. 9, 2022. ( /PTI] Patna, Aug 9 : Bihar Governor Phagu Chauhan has given an appointment to Nitish Kumar at 2 p.m. on Tuesday. This comes after Chief Minister Nitish Kumar had sought an appointment at 1 p.m. Meanwhile, the meeting of Janata Dal (United), which was taking place at the chief minister's residence at 1 Anne Marg here, has ended. Sources said that Bihar Governor Phagu Chauhan gave the time to Nitish Kumar at 2 p.m. because ministers of the BJP will be meeting him at 1.30 p.m. Sources also said that all 16 ministers of the BJP will handover their resignation letters to the Governor. The BJP ministers assembled at the official residence of deputy Chief Minister Tar Kishore Prasad, from where they will go to the Raj Bhawan. The BJP will also organise a press meet at 1.30 p.m. in Patna to disclose its future strategy. /IANS

Ganguly, Shah set for second innings as SC allows amendment to BCCI constitution
New Delhi, Sep 14 : The Supreme Court on Wednesday allowed the Board of Control for Cricket in India's (BCCI) plea in connection with the amendments p

Britain's King Charles III waves to the crowd after a Service of Prayer and Reflection for the life of Queen Elizabeth II, at Llandaff Cathedral in Cardiff, Wales, Friday Sept. 16, 2022. The Royal cou […]

Weather: Waterlogging after rains in Lucknow