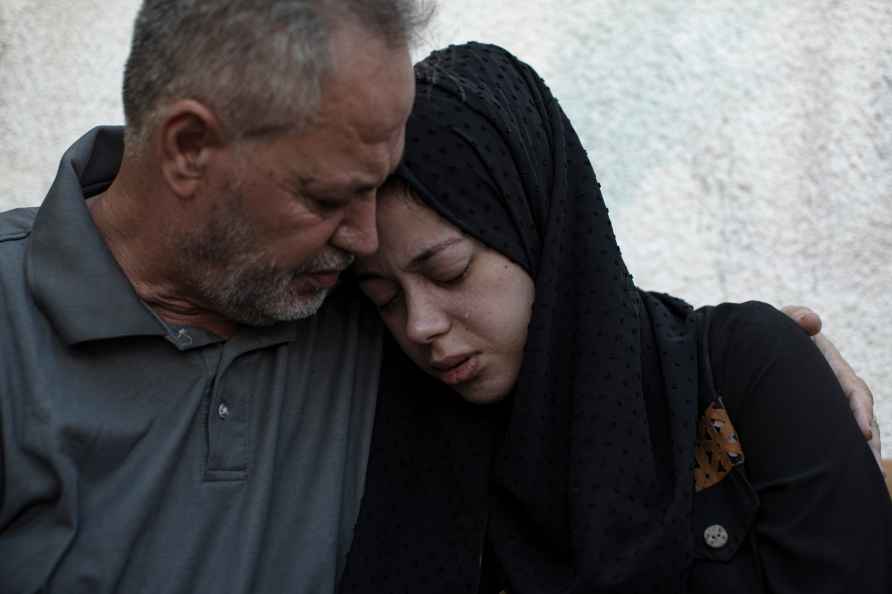 [Relatives of Ismail Dweik, who was killed in an Israeli airstrike, mourn before his funeral, outside a hospital in Rafah, in the southern Gaza Strip, Sunday, Aug. 7, 2022. An Israeli airstrike in Rafah killed a senior commander in the Palestinian militant group Islamic Jihad, authorities said Sunday, its second leader to be slain amid an escalating cross-border conflict. /PTI] Gaza/Tel Aviv, Aug 8 : A ceasefire between Israel and the militant organisation Palestinian Islamic Jihad (PIJ) in the Gaza Strip came into force at around Sunday midnight, after both sides confirmed they agreed to it. However, the PIJ said it was insisting on its right "to respond to any Israeli aggression". Israel also stressed that it "maintains the right to respond strongly" if the ceasefire is violated. The ceasefire comes after a targeted Israeli military operation that killed several high-ranking PIJ members in the Gaza Strip, including military chief Taisir al-Jabari and Islamic Jihad's southern commander, Khaled Mansour. PIJ had fired rockets at the country in retaliation for attacks killing of its high-ranking members in the Gaza Strip. A high-ranking delegation from Egypt had arrived in Gaza on Sunday evening, to negotiate a potential deal. /IANS

New Delhi, Sep 14 : Right-handed batter Robin Uthappa on Wednesday announced his retirement from all forms of Indian cricket. The 2007 T20 World Cup-winning batter, who last played for India in […]