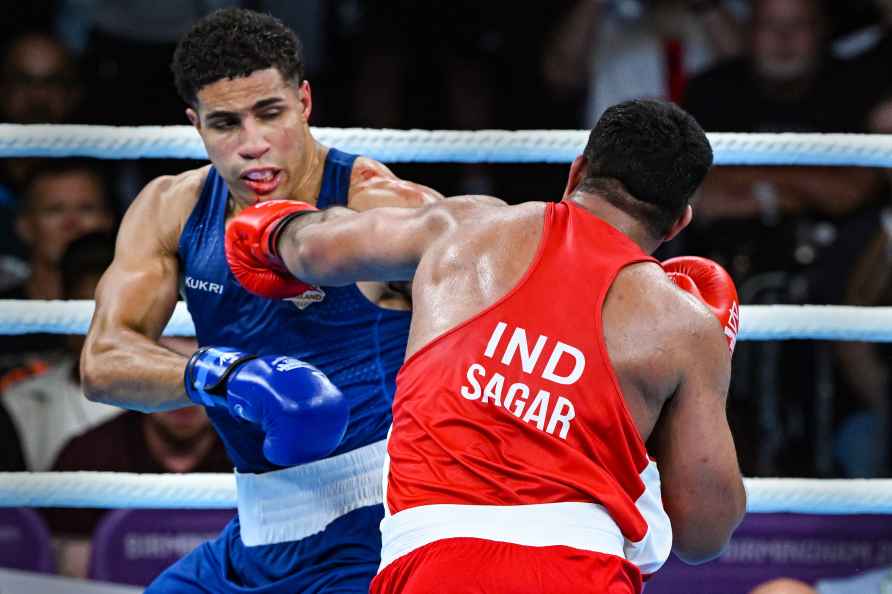 [Birmingham: Boxer Sagar Ahlawat during his bout against England's Delicious Orie in the final of 92kg (Super Heavyweight) boxing match, at the Commonwealth Games 2022 in Birmingham, UK, Sunday, Aug 7, 2022. Sagar won the silver medal. ( /PTI] Birmingham, Aug 8 : India ended its campaign in boxing at the Birmingham 2022 Commonwealth Games with super heavyweight pugilist Sagar Ahlawat settling for a silver medal after losing to England's Delicious Orie in the over 92 kg division final. Sagar, who was the fourth Indian to reach the boxing finals, was last in the ring and tried his best against an older boxer but came up short. The 23-year-old from Chandigarh started well against the 25-year-old Orie, the England national champion, as he won the first round, getting the nod from all five judges. But he could not keep up the momentum in the second and third rounds as the English pugilist came back strongly. Orie won the second round on all five judges' scoring cards and though Sagar tried to counter him in the third and final round, it was too late. Orie was adjudged by all five judges, getting a unanimous 5-0 decision. This was Sagar's first Commonwealth Games medal as the Indians rarely do well in the heavier weight divisions. To his credit, he managed to reach the final. India ended the boxing competitions at Birmingham with seven medals (three gold, one silver and three bronze). They had bagged nine medals with three gold in 2018 in Gold Coast, so it is a bit of a let down for Indian boxers. One sureshot medal that India lost was from Olympic bronze medallist Lovlina Borgohain who went out in the early rounds. Northern Ireland was the most successful team in Birmingham 2022 boxing, winning seven medals, the same as India but with five gold. /IANS