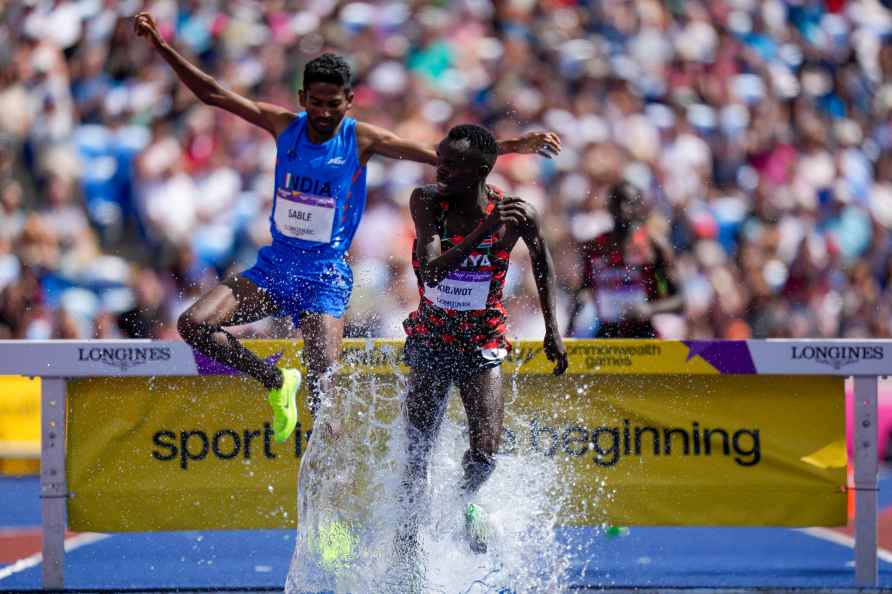 [Abraham Kibiwot, of Kenya right, leads Avinash Mukund Sable of India competes in the men's 3000 meters steeplechase final during the athletics in the Alexander Stadium at the Commonwealth Games in Birmingham, England, Saturday, Aug. 6, 2022. /PTI] By Avinash Kr Atish New Delhi, Aug 6 : Most often in many professions, one big and successful person inspires his/her siblings or near-and-dear ones to achieve big things in life and one such individual is Australian cricketer Mitchell Starc, whose younger brother Brandon Starc clinched a silver medal in high jump at the ongoing Commonwealth Games in Birmingham. Most of the cricket fans in India or across the world know about Mitchell's exploits with the ball at a cricket playground but Brandon is also creating his own legacy in sports and coming out of elder brother's shadows. Batting through the injury and pain, Brandon cleared 2.25 metres in high jump to win silver at CWG 2022 behind New Zealand's Hamish Kerr, who took the gold on countback. The whole process was not easy for Brandon who would jump, often miss the height he needed, walk away to his chair and take off his shoe. He'd rub his foot, tape his heel, put his shoe back on and jump again. The defending champion missed once at 2.15m, took three attempts to get over 2.19m, two to get over at 2.22m, but then cleared 2.25m with his first effort. That was the jump to get him into the silver medal when pain and logic said he would not. Brandon began his athletic career at Parramatta Little Athletics while attending Lidcombe Public School. However, he began to focus on the high jump in 2009 while attending Hills Sports High School. The Australian won silver with a personal best of 2.19m on his international debut at the inaugural Youth Olympic Games in 2010. He was placed eight in the Commonwealth Games in 2014, a year later he raised his record to 2.30m, before clearing 2.31m in the qualifying round at the world championships. This earned him a place in the finals, as he became the first Australian since Tim Forsyth in 1997 to enter the world championship finals. Selected for the 2016 Rio Olympics, he cleared the qualifying round with 2.29m to progress to the finals, where he was ranked 15th. Due to a shin injury in 2017, he was short of qualification for the world championship. His best height since Rio -- 2.28m, came at the 2018 Commonwealth Games trials. With a personal best of 2.32m, the Aussie won gold at the 2018 Commonwealth Games. In the same year, Starc added 3cm to his personal best after crossing 2.36m in Germany. This was the highest leap by an Australian for 21 years and moved him to equal third in the world. Five days later, Starc won the 2018 Diamond League finals and went on to win the Continental Cup. Despite his injury in 2019, he was placed sixth in the finals. He altered his run-up for the high jump by shortening it by two steps in 2019. In 2021, he won his fourth national high jump title and qualified for the Olympics with a jump of 2.33m. Once Brandon was asked if he's emerged from his big brother's shadow, the athlete had a laugh about it. "I don't know, It's a big shadow to come out of, maybe a bit more than what it was. It was surreal really. Just incredible, I have no words. I'm going to be in tears (for the medal ceremony). I'm going to love every moment of it," Brandon had said after winning gold at 2018 CWG in Gold Coast. He may admit it or not but the high jumper is certainly creating his own history and legacy in a country like Australia, which is known for its strong sports culture. Talking about pacer Mitchell Starc's contribution to Australian cricket, he has been one of their biggest match-winners in the last decade or so. Whether it's red-ball or white-ball cricket, the left-arm pacer most often creates the most menacing sight for the world's best batsmen. He has helped Australian win Ashes series and even 50-over World Cup with his sheer brilliance. Starc finished as the highest wicket-taker in two successive ODI World Cups (2015 and 2019), which shows that he is made for big stages. In January 2022, he was declared Australia's male player of the year and got the Allan Border Medal, which is considered to be the most prestigious individual prize in Australian men's cricket. Interestingly, Starc has got married to Alyssa Healy a wicketkeeper for the Australian women's team and niece of former Australia glovesman, Ian Healy. Alyssa herself is a big name in women's cricket and known for producing match-winning knocks at the World Cup, most recently in April 2022, when Australia won their record-extending seventh Women's World Cup title. During India versus Australia game at the 2022 CWG last week, Alyssa Healy claimed two catches of Smriti Mandhana and Shafali Verma and became the first ever wicket-keeper to register 100 dismissals in T20I cricket in both men's and women's category. She was part of the Australia team that hoisted the ICC Women's World Cup trophy in India in 2013 and another third World T20 victory in Bangladesh in 2014. The attacking batter also helped Australia win back the Ashes from England in 2015. In 2018, Healy was named ICC T20 Player of the Year after her outstanding performances that drove her nation to a fourth ICC World T20 title. In 2020, she was Player of the Match in Australia's T20 World Cup Final victory over India at the MCG. And in 2022, she rose to even greater heights, smashing 170 against traditional rivals England in the final to lead Australia to World Cup victory in Christchurch. /IANS