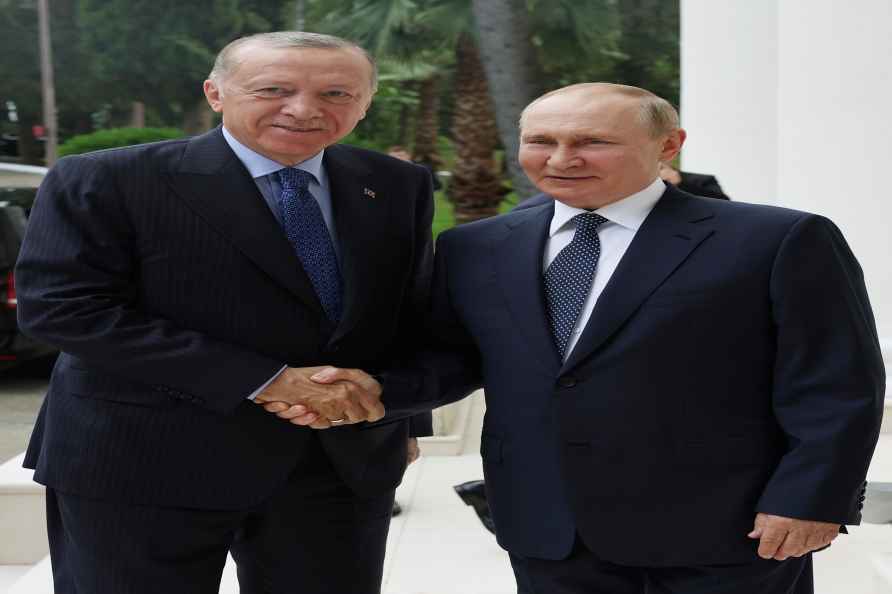 [In this handout photo provided by the Turkish Presidency, Turkish President Recep Tayyip Erdogan, left, and Russian President Vladimir Putin shake hands prior to their meeting at the Rus sanatorium in the Black Sea resort of Sochi, Russia, Friday, Aug. 5, 2022. Turkish President Recep Tayyip Erdogan traveled to Russia Friday for talks with Russian President Vladimir Putin expected to focus on a grain deal brokered by Turkey, prospects for talks on ending hostilities in Ukraine, and the situation in Syria. /PTI] Ankara, Aug 5 : Turkish President Recep Tayyip Erdogan and his Russian counterpart Vladimir Putin are scheduled to meet on Friday in the seaside resort of Sochi. Turkey's planned military incursion to attack a Kurdish militia in northern Syria will top the agenda among other regional issues, dpa news agency reported citing Ankara's state broadcaster TRT as saying. Moscow had recently advised against such an offensive. Ankara considers the US-backed Syrian Kurdish militia the People's Defence Units (YPG) a terrorist group and suspects it is linked to domestic insurgents. A Turkish offensive in Syria's north has been on hold since 2019 following two ceasefire deals brokered by the US and Russia. The two leaders will also discuss the war in Ukraine and a grain corridor deal, TRT added. Turkey and the UN recently brokered the deal between Kiev and Moscow to resume grain exports from three Ukrainian ports. According to the Kremlin, on the agenda is also the potential sale of unmanned combat drones from NATO member Turkey to Russia. Shortly after the start of the ongoing Russian invasion of Ukraine, Erdogan said he would not rule out arms deals with Russia. Turkey maintains close ties with both Ukraine and Russia and sees itself as a mediator between the two neighbours. /IANS

Washington, Aug 13 : The US space agency has asked university students to design a metal production pipeline on the Moon -- from extracting metal from lunar minerals to creating structures and tools. […]

Paris, Aug 13 : Karim Benzema was among the 30-man list of nominees for the 2022 Ballon d'Or award, which was announced by France Football on Friday, while seven-time winner Lionel Messi was omitted f […]

Portland Timbers midfielder Santiago Moreno (30) vies for the ball against Toronto FC midfielder Federico Bernardeschi (10) during the first half of an MLS soccer match in Toronto on Saturday, Aug. 13 […]