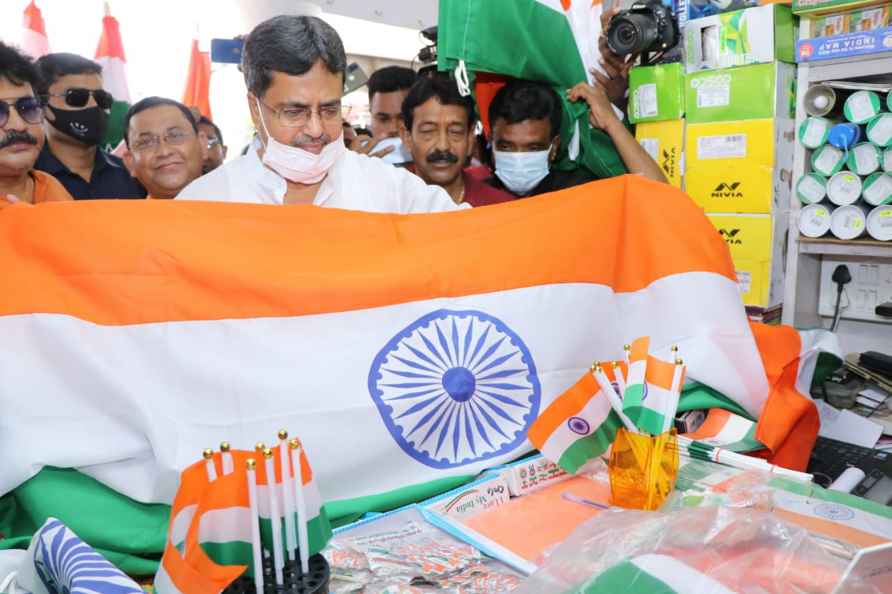 [Agartala: Tripura Chief Minister Manik Saha buys a national flag to promote 'Har Ghar Tiranga' campaign, organised as part of 'Azadi Ka Amrit Mahotsav' to encourage people to hoist the national flag to celebrate the 75th Independence Day, in Agartala, Friday, Aug. 5, 2022. ( /PTI] Lucknow, Aug 5 : The Samajwadi Party (SP) and the Congress will launch special campaigns from August 9 to mark 75 years of India's Independence. SP national president Akhilesh Yadav will launch 'Tricolour on every home' campaign from August 9 to August 15 from a village in Kannauj. "He will distribute Khadi Tricolour to the families in the village in Tirwa tehsil of the district under the party's campaign 'Har Ghar Fehrey Rashtradwaj Tiranga (National flag to hoist on every house)," the party stated in a press release. "With the distribution of the Khadi Tricolour to people of the village, the national president of the SP will make an appeal to all the citizens in the state to hoist the flag on their homes on August 15. The Congress, on the other hand, will organise 'Azadi Ki Gaurav Yatras' covering a distance of 75 kilometres in every Lok Sabha constituency from August 9. A state level programme will be organised in the state capital on August 15. "The Congress will hold Gaurav Yatras in all the 80 Lok Sabha constituencies of the state from August 9. They will cover a distance of 75 kilometres in each Lok Sabha constituency and will pass through all the 403 Assembly constituencies," said Uttar Pradesh Congress Committee (UPCC) spokesman Ashok Singh. Akhilesh Yadav, on the other hand, will also meet the families of freedom fighters in the area and will felicitate them. He will also impress upon the people that it was during the SP regime that villages got concrete roads and schools, water filters and several other facilities that have been ruined under the BJP government. The Congress Gaurav Yatras, meanwhile, are being organised to mark 75 years of India's Independence and in response to 'Har Ghar Tiranga' programme of the Union government. The Congress proposes to launch and end the Gaurav Yatras at a place of cultural and historical importance in the state. The Uttar Pradesh Congress Committee (UPCC) has sent its observers and senior office- bearers to each district to make preparations for the Gaurav Yatras. There are indications that Congress general secretary Priyanka Gandhi Vadra may launch or join the yatra at its culminating point in Lucknow or in any other district of Uttar Pradesh. /IANS

Bikaner: People participate in the 'Tiranga Yatra' under the 'Azadi ka Amrit Mahotsav', ahead of Independence Day, in Bikaner, Saturday, Aug. 13, 2022. ( /PTI […]