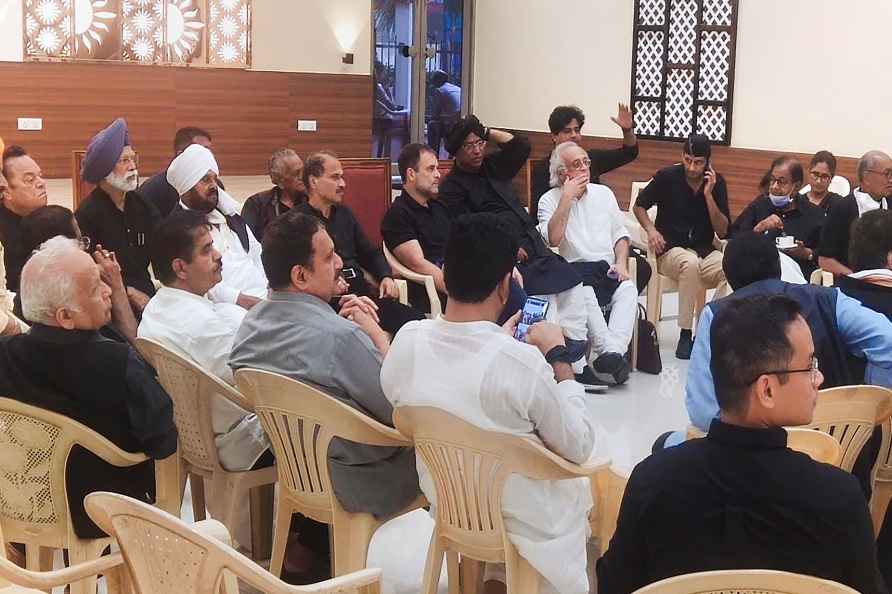 [New Delhi: Congress leader Rahul Gandhi with party leaders after being detained by police during a protest over price rise, unemployment and GST hike on essential items, at New Police Lines in New Delhi, Friday, Aug 05, 2022. ( /PTI] New Delhi, Aug 5 : Rahul Gandhi on Friday alleged that all the institutions in the country are being controlled by the Rashtriya Swayamsevak Sangh (RSS). While launching an attack on the ruling Bharatiya Janata Party (BJP), he said that even "Hitler used to win elections". "Hitler had also won elections, he too used to win elections. How did he used to do it? He had control of all of Germany's institutions...Give me the entire system, then I will show you how elections are won," said the Congress leader while addressing a press conference ahead of the party's nationwide protest against unemployment and price hike. Gandhi said that the more he talks about the issues of people, the more he would be attacked. He further said, "Democracy is dying, what do you think, what do you feel? What this country built in 70 years was finished in 8 years, there is no democracy in the country, 4 people's dictatorship is going on. We want to raise the issue of inflation, we want to discuss, but we are being detained and are not allowed to discuss in the House also." "I will do my work and I will be attacked more. The one who threatens, is the one who is scared. They are scared of the condition of the country. The promises that they have not been able to meet. They are liars. They lie 24 hours a day," Gandhi said. Rahul Gandhi also claimed that the BJP attacks the Gandhi family. "Why do they attack the Gandhi family? They do it because we fight for an ideology and there are crores of people like us. We fight for democracy, for communal harmony and we have been doing this for years. It's not just me who did that, it has been happening for years." He claimed that what India has built brick by brick, starting almost a century ago, is being destroyed. "Anybody who stands against this idea of onset of dictatorship is viciously attacked, jailed, arrested and beaten up," Rahul Gandhi said. /IANS

Assam to convert all govt schools to higher secondary level

Guwahati, Sep 14 : The Assam government plans to convert all its secondary schools to higher secondary level, the Assembly was told on Wednesday. Replying to a question, Education Minister Ranoj […]