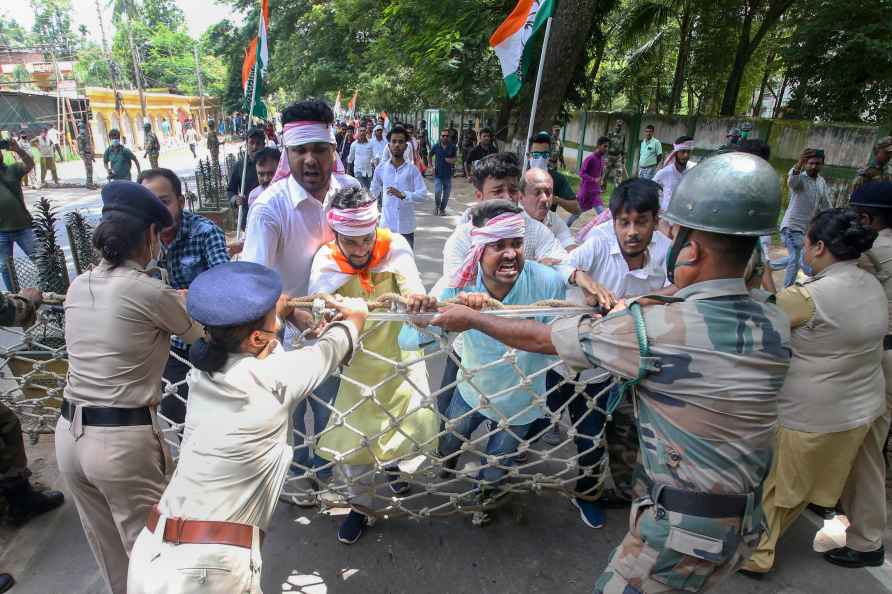 [Agartala: Police personnel try to stop Congress workers during their march towards Raj Bhavan as part of party?s nationwide protest over price rise and GST hike on essential items, in Agartala, Friday, Aug. 5, 2022. ( /PTI] Patna, Aug 5 : A protest march of the Congress here on Friday was stopped by the police as hundreds of party workers clashed with the policemen at Bailey road. The agitated Congressman shouted slogans against Chief Minister Nitish Kumar and Prime Minister Narendra Modi. The Congress leaders said that they wanted to go to the Raj Bhawan and submit a memorandum to Governor Phagu Chauhan. Madan Mohan Jha, the state president of Congress in Bihar, who was heading the protest march, said: "We are going to protest against the price rise of commodities, inflation, and the way Center has imposed 5 per cent GST on essential food items in the country." "We were on the way to Raj Bhawan to submit a memorandum to Governor Phagu Chauhan, but the police stopped us. There is no section 144 imposed in the areas where we have opted to hold the protest march. We have not breached the Covid protocol as well. It is hard to understand why the Patna Police stopped our march against inflation," Jha said. "Crime is on the rise in the state and criminals are running a parallel government here. They are openly roaming in the state, but the Bihar Police have no time to arrest them. On the other hand, if anyone raises the voice for common people, the state police are standing there to stop them," Jha said. "When other parties (including BJP) do the march, the police would not stop them, but when the Congress party does the march silently, they are not allowing it. Our fight against the Narendra Modi government will continue and we will do protest marches in future as well," Jha said. /IANS

[Gurugram: Police personnel try to disperse farmers, blocking the National Highway-48, during their protest against the proposed acquisition of 1,810 acres of land in three villages of Manesar and dem […]