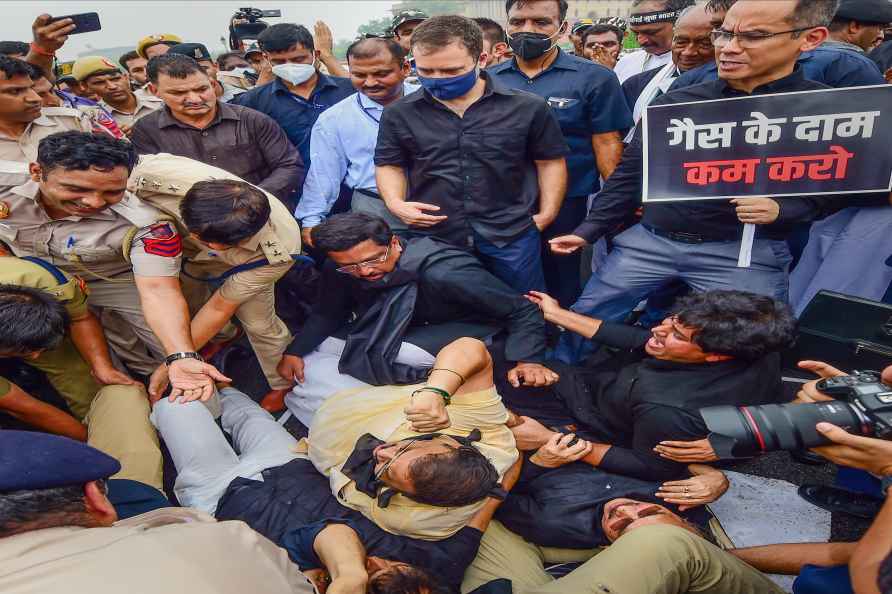 [New Delhi: Congress MPs lie down on the road as party leader Rahul Gandhi, wearing black clothes, looks on during a protest march as part of party?s nationwide protest over price rise, unemployment and GST hike on essential items, in New Delhi, Friday, Aug 05, 2022. ( /PTI] New Delhi, Aug 5 : Congress leader Rahul Gandhi, who was detained earlier in the day on Friday by the Delhi Police, has been kept at new police lines, Kingsway Police camp, here in the national capital, a Delhi Police official said. "They were detained from the North fountain near Parliament. They are detained in Kingsway camp," a senior Delhi Police official said. Congress had announced a nationwide protest against the policies of the Central government, which has led to a rise in unemployment and inflation in the country. Wearing black clothes, the MPs, under the leadership of Rahul Gandhi, tried to take out a march from the Parliament House to the Rashtrapati Bhawan. However, as the parliamentarians moved forward towards Rashtrapati Bhawan, the Delhi Police stopped them midway near Vijay Chowk. The police tried to convince Rahul for a while, but as he was refusing to stop, they detained him and took him in a bus to Kingsway Police camp. While speaking to the media persons before getting detained, Rahul Gandhi accused the Delhi Police of manhandling the parliamentarians. "We are standing here on the issues of price rise and unemployment. We wanted to move forward but the police did not allow us,"Gandhi said. When asked about the MPs being manhandled, Rahul said, "That is fine. I'm happy to be manhandled. Our job is to resist these forces, our job is to make sure that Indian democracy is protected. Our job is to raise issues of the people like price rise and unemployment and we are doing that." Around 10 days ago also on July 26, Rahul Gandhi was detained in Kingsway camp during a protest march carried out by the Congress lawmakers from Parliament to Rashtrapati Bhawan. /IANS

Bengaluru, Aug 13 : Karnataka police have arrested an upcoming Kannada actor for his alleged involvement in honey-trapping a 73-year-old industrialist and extorting money from him, police said on Satu […]

[Bengaluru: District Special Weapons and Tactics Team (D-SWAT) team during a flag march amid controversy over the disputed Idgah Maidan, on the eve of 76th Independence Day, at Chamrajpet area in Beng […]