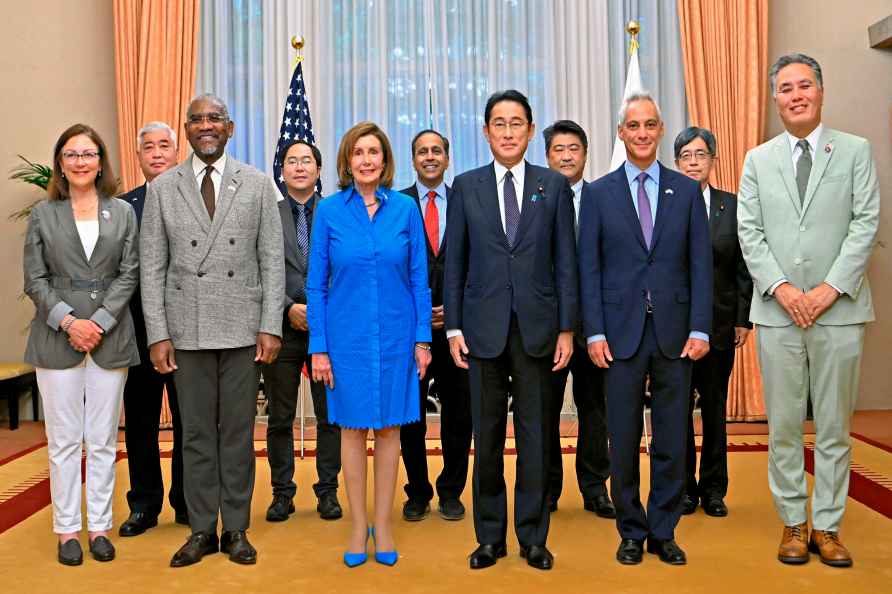 [U.S. House Speaker Nancy Pelosi, front, center left, and her congressional delegation pose for a photo with Japanese Prime Minister Fumio Kishida, center right, before their breakfast meeting at the prime minister's official residence in Tokyo, Friday, Aug. 5, 2022. /PTI] Tokyo, Aug 5 : Japanese Prime Minister Fumio Kishida and visiting US House Speaker Nancy Pelosi met in Tokyo on Friday to reaffirm their commitment to working together closely to maintain peace in the region, as tensions in the Taiwan Strait continue to rise. On Thursday, five missile shells were fired into Japan's exclusive economic zone by China's People's Liberation Army from the waters off Taiwan, reports dpa news agency. China's behaviour had "serious implications for peace and stability in the region and the international community", Kishida was quoted as saying by Japanese media reports. Pelosi, the third-highest ranking official in Washington, arrived in Tokyo on Thursday evening at the end of an Asian tour that has also taken her to Singapore, Malaysia, Taiwan and South Korea. Her visit to Taiwan has heightened tensions with China, which sees the democratic island republic as part of its territory. The Chinese military was holding major air and sea drills in the waters surrounding Taiwan this week, in what appeared to be retaliation for the visit. China's largest military show of force in decades apparently had the goal of deterring Taiwan from any further displays of independence. Japan has refrained from taking an official stance on Pelosi's visit to Taiwan, and has instead advocated for a peaceful resolution to the island's issue through dialogue. /IANS