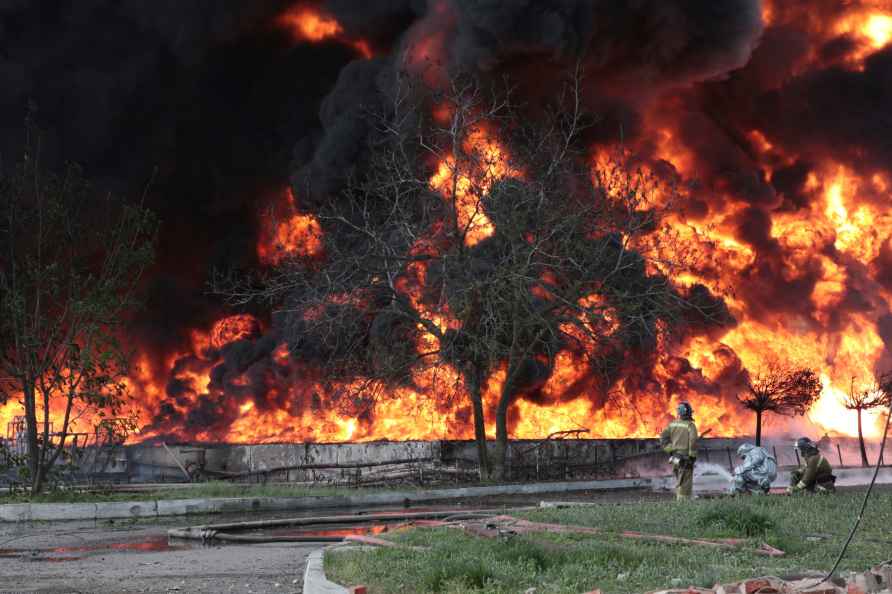 Berlin, Aug 4 : After an explosion at a police blasting site in Berlin's Grunewald forest, a fire has broken out in the adjacent forest and is spreading, the fire brigade said on Thursday. An area of roughly 1.5 hectares was affected and further explosions have occurred, reports dpa news agency. Residential areas are not in danger, however, according to firefighters. "We will prevent that," a spokesman said. Though there have been no casualties, Berliners are being told to avoid the area as far as possible. It is assumed that the extreme dryness in the area will influence the further course of the fire. The extreme heat expected on Thursday will be especially hard on the emergency services. Due to further explosions and flying debris, the fire brigade said it had not yet started extinguishing the fire, and the emergency services had initially withdrawn to about 1,000 metres away. There are 100 firefighters and police at the scene. Additional firefighters and special forces from the Bundeswehr have been requested. Water cannon and evacuation tanks have also arrived. According to a police spokesperson, it is still completely unclear how the explosion could have occurred. The site is used to dispose of ammunition in a controlled manner. /IANS

4 killed as boat capsizes off Galapagos, Ecuador
Quito, Sep 27 : At least four people were killed and two others were missing after a boat carrying tourists capsized off the Galapagos Islands, local

United Nations, Sep 27 : The General Assembly has re-elected Italian diplomat Filippo Grandi as the UN High Commissioner for Refugees (UNHCR) for a term of two years and a half. His new term beg […]

Isha Koppikar briefs about relevance of different colours in Navratri

Mumbai, Sep 27 : 'Ek Vivaah... Aisa Bhi' actress Isha Koppikar discussed her plan of celebrating the auspicious occasion of Navratri and also briefed about different colours that are linked with each […]

Magnus Carlsen courts controversy, calls Niemann a cheat, says he is not willing to play against the American

Meta to make it easier to switch between FB, Instagram accounts

San Francisco, Sep 27 : Meta announced that it is testing new ways for people to more easily switch between and create new accounts and profiles on Facebook and Instagram globally for iOS, Android and […]