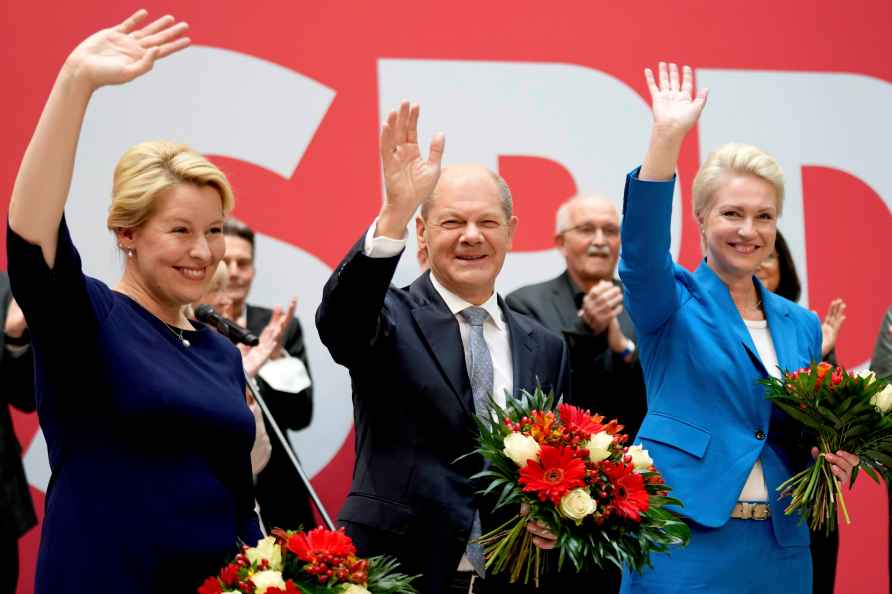 Berlin, Aug 4 : The turbine for the Nord Stream 1 gas pipeline, which was serviced in Canada, is ready for use and could be delivered to Russia "at any time", said German Chancellor Olaf Scholz. "All it takes is for someone to say, 'I'd like to have it'. Then it will be there very quickly," Xinhua news agency quoted Scholz as saying after a visit to the Siemens plant in Muelheim an der Ruhr in North Rhine-Westphalia, where the turbine is currently located. The turbine was serviced by Siemens Energy in Canada, after which it has been in Germany since mid-July. "Nothing stands in the way of its onward transport to Russia, except that the Russian buyers must state that they also want the turbine and provide the necessary information for customs transport," said Scholz. Russian gas supplies to Germany via the Nord Stream 1 pipeline have been reduced several times and Europe's biggest economy is struggling to fill its gas storage. Last week, the deliveries were further cut to 20 percent of the pipeline's full capacity. German's former Chancellor Gerhard Schroeder held Siemens Energy responsible for the turbine's late delivery, questioning why it was brought to Germany and not to Russia. "This is the responsibility of Siemens," he told RTL/n-tv. To reduce natural gas consumption in power generation, the German government allowed coal-fired power plants to return from reserve and is also considering extending the lifetime of the country's last three nuclear power plants beyond 2022. In order to prepare for the coming winter, energy ministers of the European Union (EU) last week agreed on a voluntary savings target of 15 per cent compared to a country's average gas consumption in the past five years until the end of March 2023. If the gas crisis worsens, the EU decision also provides for the possibility of triggering a "Union alert". In this case, the reduction of gas consumption would become mandatory. /IANS

IOM seeks over $50 mn to scale up assistance for 2.5 mn Somalis as famine looms
Mogadishu, Sep 14 : The UN migration agency, the International Organisation for Migration (IOM), has said it requires more than $50 million to reach 2

IOM seeks over $50 mn to scale up assistance for 2.5 mn Somalis as famine looms

Mogadishu, Sep 14 : The UN migration agency, the International Organisation for Migration (IOM), has said it requires more than $50 million to reach 2.5 million people affected by the drought by the e […]

Los Angeles, Sep 14 : The US now joins a list of nearly 30 other countries with circulating vaccine-derived poliovirus (cVDPV) identified by the WHO, the US Centers for Disease Control and Prevention […]

Gaza, Sep 14 : Dozens of Palestinians rallied in western Gaza against an Israeli blockade imposed on the Palestinian enclave for more than 15 years. During the rally, which was organised on Tues […]