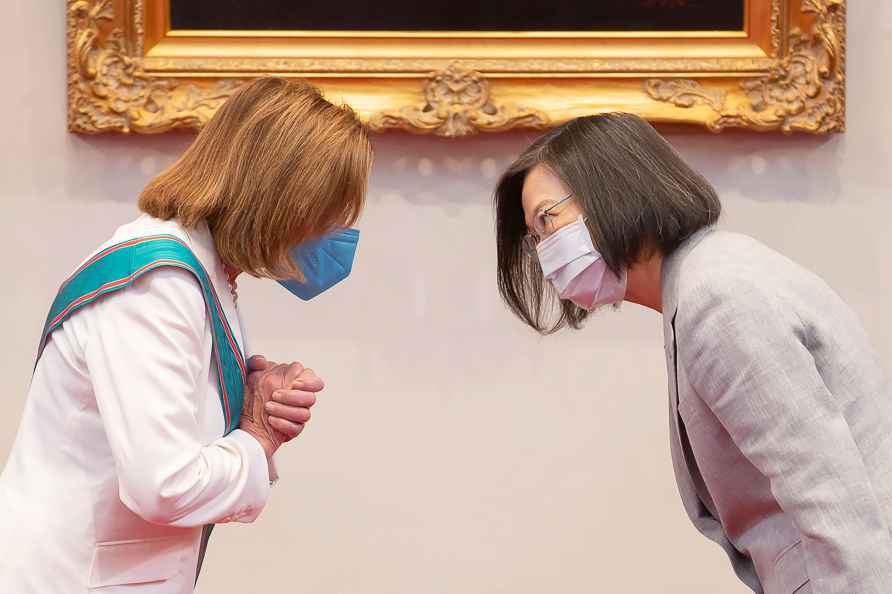 Beijing, Aug 4 : Starting from Thursday, China has said that it will carry out five days of "necessary and just" military drills in the seas around Taiwan following US House Speaker Nancy Pelosi's trip to the island, which came in defiance of Beijing's repeated warnings, a media report said. According to the BBC report, China made the announcement shortly after Pelosi left Taiwan on Wednesday after her brief and controversial visit. "The exercises will take place in some of the world's busiest waterways and will include long-range live ammunition shooting," the report quoted China as saying. Meanwhile in response, Taiwan said that it had already scrambled jets to warn them off. It has also asked ships to find alternative routes to avoid the drills and is negotiating with neighbouring Japan and the Philippines to find alternative aviation routes. President Tsai Ing-wen said the country was facing "deliberately heightened military threats". Pelosi, the most senior US politician to visit Taiwan in 25 years, made the stop on Tuesday as part of a wider Asian tour despite China warning her against it, the BBC reported. In a statement after her visit, the House Speaker said that China cannot "prevent world leaders or anyone from travelling to Taiwan to pay respect to its flourishing democracy, to highlight its many successes and to reaffirm our commitment to continued collaboration". Accusing the US of "violating China's sovereignty under the guise of so-called democracy", Chinese Foreign Minister Wang Yi said: "Those who play with fire will not come to a good end and those who offend China will be punished." The Chinese Foreign Ministry also summoned the US ambassador to China, Nicholas Burns, on Wednesday to protest Pelosi's visit as a "serious provocation and violation" of the one-China principle, state newspaper Global Times reported. China has sent 21 planes into Taiwan's air defence identification zone on Tuesday alone, the Defence Ministry in Taipei said. For days, Pelosi had declined to confirm news reports that she would visit and Taiwan was not on her official itinerary. An editorial by Pelosi was published in The Washington Post minutes after she arrived in Taipei. /IANS

Mumbai, Sep 20 : From playing a character who suffers from erectile dysfunction to bringing forth issues of premature balding, Ayushmann Khurrana has always pushed the envelope with his portrayals. Th […]

Islamabad, Sep 20 : Pakistan Prime Minister Shehbaz Sharif has reached the US to attend the 77th session of the UN General Assembly (UNGA) this week where he will present his crisis-hit country's case […]