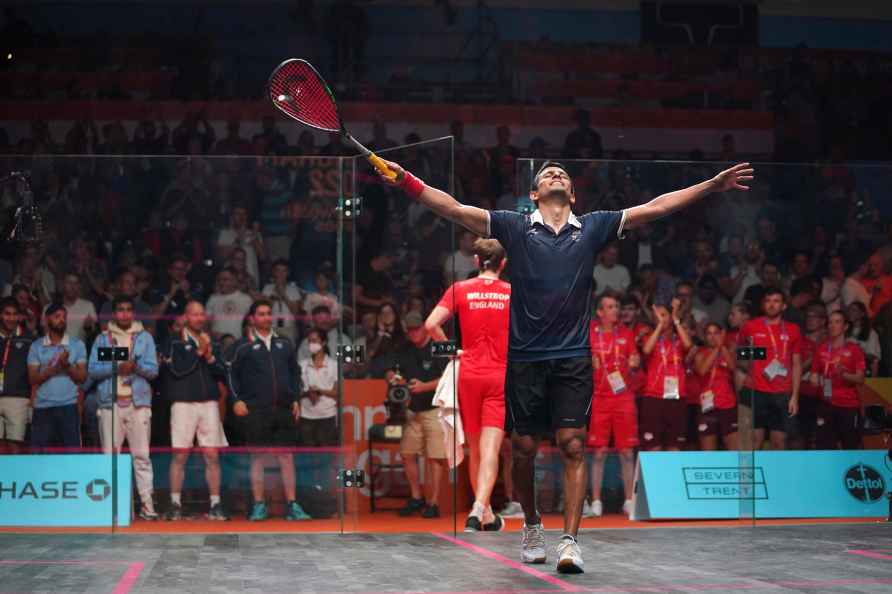 [India's Saurav Ghosal celebrates victory in the Men's Singles, Bronze Medal Squash Match between India and England at the University of Birmingham Hockey and Squash Centre on day six of the 2022 Commonwealth Games in Birmingham, England, Wednesday, Aug. 3, 2022. /PTI] By B Shrikant Birmingham, Aug 4 : Till about a few days back, high jumper Tejaswin Shankar was not sure whether he would be able to participate in the 2022 Commonwealth Games in Birmingham. On Wednesday, he was standing on the podium at the Alexander Stadium here, with a bronze medal around his neck and a smile of satisfaction on his lips as he bagged his first medal in a major multi-discipline international competition. After not being picked for the Games as he did not participate in the Inter-State meet -- which were the trials, his name was eventually cleared for participation by the court and it was only last week that the organisers relented and permitted him to join the Indian athletics squad as a late replacement. He reached Birmingham just three days back. He gave all his critics a resounding reply, silent and potent, which also makes his bronze medal as good as gold. With one superb leap over the bar, the 23-year-old Tejaswin silenced his critics by winning the bronze medal in the men's high jump, India's first medal in athletics in the 2022 edition of the Games and the country's 29th medal overall in track and field at the Commonwealth Games. The medal did not come easy as Tejaswin had to overcome a stiff challenge to bag it. His best effort of the day of 2.22 metres -- not his personal best effort -- was nevertheless crucial as that secured him third place on the podium. New Zealand's Hamish Kerr won the gold medal with a best jump of 2.25 -- the same as Brandon Starc of Australia, who eventually won the silver medal thanks to the 2:19m. He cleared it but was soon joined by the chasing pack, who were looking for an opportunity. Tejaswin eventually won the medal with a leap of 2.22, He attempted to lift 2.25, assuring himself a bronze. He did make an attempt at 2.25 regards to sealing victory. "The medal means the world to me. Five days ago I was not even sure whether I would be here or not. Today to go home with some hardware, it's just people's good wishes, my family's support by mother's support, she was awake the whole night watching me, she's been on it for the last one, one and half month. It's been a tough journey for us as a family but in the end everybody came together and made it happen," said Tejaswin after winning the bronze. "I am thankful to everybody including the federation, the IOA, and everybody who made it happen at the last moment, to put me in this position. I am not among those people who make excuses for not being here and just because I am here, I want to give my best performance," said Tejaswin. Though he did make an attempt to go higher and fight for the silver medal. He said though he had doubts about whether it was too late to get into the Commonwealth Games, he continued to fight and practice. On Wednesday, he played a tactical game, first ensuring that he won the bronze medal before making an attempt to add a few more inches to the height he had already cleared but could not do so. Though Tejaswin could not come closer to his personal best, it was enough for him to get into the history books as the first high jumper from India to win a high jump medal in the Commonwealth Games. /IANS